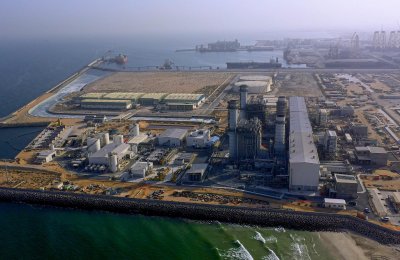 Steady progress is being made on the Hamriyah Independent Power Plant in Sharjah with more than 80 per cent work already completed.
It consists of a general electric gas turbine with a production capacity of 400 MW, a heat recovery boiler, and a steam turbine with a capacity of 200 MW.
Al Hamriyah project, which is among the most recent ones in the energy sector, comprises three stages operating on an installed cycle system, each of which can produce 600 MW.
The project aims to increase the installed production capacity to 4,600 megawatts of electricity, and raise the operational efficiency to more than 60 percent, thus having a significant impact on reducing carbon emissions, said HH Dr. Sheikh Sultan bin Muhammad Al Qasimi, Supreme Council Member and Ruler of Sharjah, after an inspection tour of the project.
He was later briefed on the project’s operations room and learned how it works using the latest technologies in control and follow-up.
Dr Sheikh Sultan expressed his happiness with the pace of work which is being implemented in phases.
The first of the installed phases began trial operation last April, with the main operation to start next November. The second stage is expected to be completed in February 2022 while the third and final group in February 2023.-TradeArabia News Service