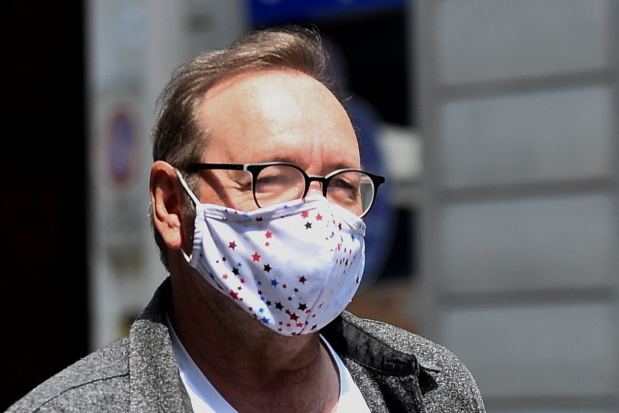 FILE IMAGE: Actor Kevin Spacey walks down Carlo Alberto street as he visits the city, where he is expected to return for a cameo appearance in a low budget Italian film, after largely disappearing from public view, in Turin, Italy, June 1, 2021. Reuters Photo

New York: A federal judge on Thursday dismissed all claims by one of two men suing the actor Kevin Spacey over alleged sexual misconduct in the 1980s, after the plaintiff refused to identify himself publicly.

The dismissal by US District Judge Lewis Kaplan in Manhattan came after lawyers for the man known in court papers as "C.D." said revealing his identity would cause "sudden unwanted attention" and be "simply too much for him to bear."

Kaplan ruled on May 3 that Spacey's fame magnified the public interest in knowing who C.D. was, and that "fairness" required he come forward before continuing the civil damages case.

C.D. said he was 14 in 1983 when he and Spacey began a sexual relationship that ended after he resisted Spacey's attempts to penetrate him.

The other plaintiff, actor Anthony Rapp, said he was 14 in 1986 when Spacey engaged in an unwanted sexual advance with him during a party at the actor's home.

Spacey, 61, has denied C.D.'s and Rapp's sexual misconduct accusations. His lawyers did not immediately respond to requests for comment.

Peter Saghir, a lawyer for C.D. and Rapp, declined to comment on Thursday. He has suggested that C.D. might pursue an appeal if his case were severed from Rapp's.

Spacey has won Oscars for best actor in "American Beauty" and best supporting actor in "The Usual Suspects."

He also starred in Netflix's "House of Cards" before Netflix severed its ties with him after sexual misconduct accusations surfaced in 2017.