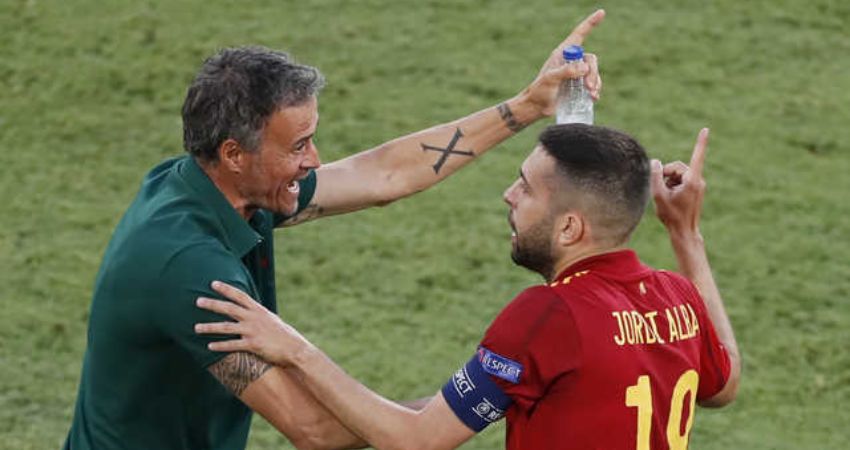 SEVILLE - Spain wing back Jordi Alba has dismissed suggestions their Euro 2020 team lack the passion and intensity of previous Spanish sides after they stuttered to a 1-1 draw with Poland that leaves them third in Group E with no guarantee of advancing.

The Spaniards are on two points after draws with Sweden and Poland, and Saturday's clash suggested they still have some way to go to find their top form as they perpare to face Slovakia.

Just as they did in their dull scoreless draw with Sweden, Spain dominated possession but struggled in front of goal as Gerard Moreno missed a penalty and Alvaro Morata, despite scoring, wasted a number of good second-half chances.

"I really think that in terms of the intensity and the determination, you really can't question that, but of course there are plenty of things to improve, that's the same for all teams, but I think we're all doing a fantastic job," he told reporters.

"We're annoyed with the result but if we continue working hard I'm sure that the result will come. On Wednesday we have another match, another final, and we're going to try and continue giving all that we have to win and to get through to the next round."

Gerard Moreno hit a post with a second-half penalty and Morata allowed a number of decent chances go begging, but for the most part Spain were once again pedestrian in possession and lacking bite in attack.

The result leaves coach Luis Enrique, who has shown great faith in Morata so far, with a lot of thinking to do ahead of Spain's final group game against Slovakia.

"Morata has done many things well and in the first game, the goal is something that comes in handy for the striker -- it's a pity that we have not been able to do more," he told Spanish broadcaster Telecinco.

The 51-year-old declined to offer a deeper analysis of what went wrong as the Spanish attack came up short once again.

"I have a tremendous desire to see the game again to analyse it in depth, the feelings right now are not the best. Perhaps we have been superior, but not enough," he said.

"As a coach I have had to solve problems, we have to come in four days to give joy to the fans who deserve it and if we don't win we will be out."