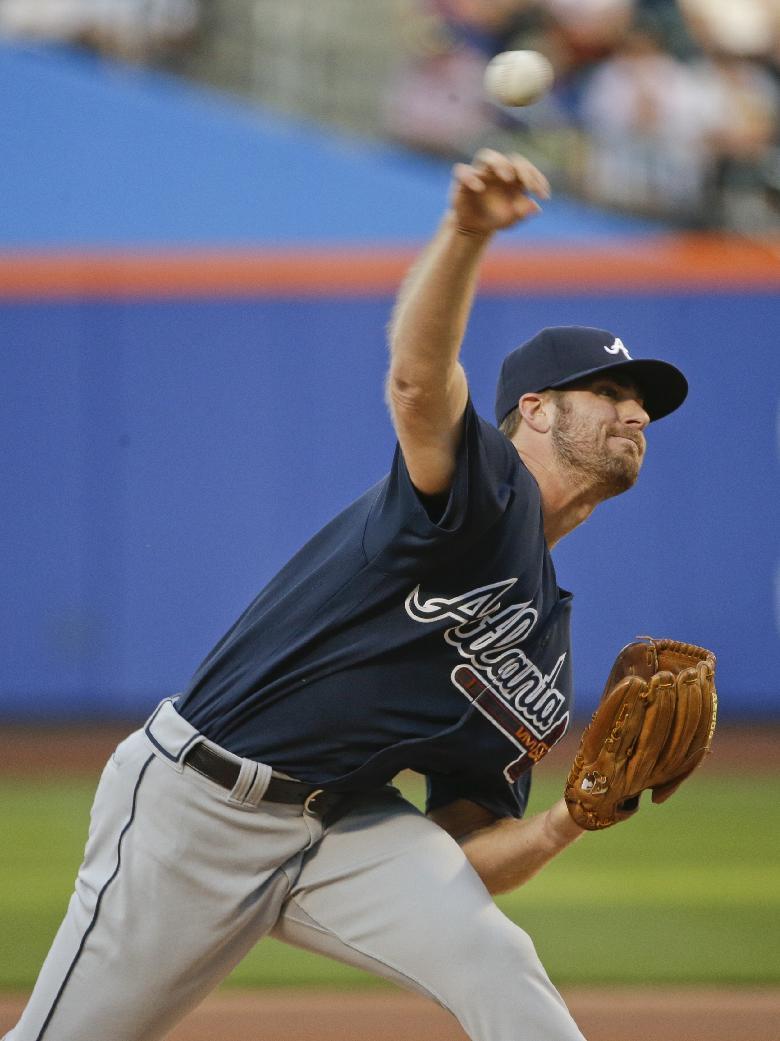 New York: Atlanta newcomer John Gant was standing at his locker, talking to reporters about his nifty performance when someone stepped up, extended a hand and offered congratulations.

Gant, the rookie righty with the weird windup, earned his first big league win by beating the team that traded him away last summer, leading the Braves past the New York Mets 5-1 on Friday night.

Gant (1-1) threw two-hit ball for 6 2/3 innings, helping the Braves post their first three-game winning streak since mid-April. They started the day tied with Minnesota for the worst record in baseball.

Gant gave up one run, struck out five and walked two in his second start in the majors. The Mets got a close-up look at his unusual mechanics — he lifts his left leg as if he's going to begin his motion, but puts it down, comes to a full stop and then goes into a normal delivery.

"It gives me absolutely no advantage whatsoever," Gant said with a smile. "It's comfortable."

Gant said he started the routine in the low minors, after his catcher playfully imitated him.

Gant had a few friends in the park to see his milestone win, but took away no souvenirs.

Atlanta star Freddie Freeman kept up his extra-base hit barrage with an RBI double and also singled twice. Earlier this week, he went 10 for 18 with three home runs, a triple and two doubles in a four-game series vs. Cincinnati.

Hunter Cervenka protected a 4-1 lead in the seventh, relieving with the bases loaded and two outs and fanning pinch-hitter Wilmer Flores.

Matt Harvey (4-9) went backward after three strong starts, drawing a smattering of boos from the home crowd. Atlanta often swung at his first pitch and he gave up four runs, seven hits and two walks in six innings.

"Couple of balls they hit were, again, heart of the plate," Mets manager Terry Collins said. "It's locating your stuff and if you make a mistake, hopefully they don't do damage, and tonight they did.

"We will continue to make sure he stays positive because I don't think it should affect him. He's been pitching too good," he said.

Gant never got above Double-A for the Mets before they traded him to the Braves last July with another minor leaguer for Kelly Johnson and Juan Uribe. Gant said he had thrown once before on the mound at Citi Field for a pre-draft workout.

Gant debuted in the majors this year and made seven relief appearances — in between four trips to the minors — for Atlanta before getting a chance to start.

"I've been doing a lot of traveling this year so far," he said.

Along with his path and his pitching motion, Gant is quirky in other ways, too.

The 23-year-old takes little hops to clean off the rubber, rocks from side to side waiting for batters to get ready and tosses the ball up to himself during breaks. Before each inning, he puts his glove on the back off the mound, picks up the rosin bag, dusts his right arm and rubs the residue on his upper body.

Curtis Granderson hit a leadoff double in the first for the Mets, but Gant retired 17 of the next 18 batters. Granderson scored on a groundout by Yoenis Cespedes.

Chris Withrow was summoned to relieve Gant after a two-out walk in the seventh, but getting into the game wasn't so easy. Withrow couldn't get the bullpen door open, no matter how much he pushed, pulled or pried it. A Mets bat boy tried to help from outside and finally, after about 15 seconds, a Braves teammate swung it free and Withrow got loose.

The game ended on an interference call that resulted in a double play. James Loney slid into second baseman Jace Peterson, whose relay to first was too late to get Kevin Plawecki.

"They said my arm went into him," Loney said. "You're sliding into someone and you're that close, your arm can go into him. It wasn't like I tried to hit him."

Braves: 3B Adonis Garcia didn't play, a day after he left a game with a sore left ankle. He could be back in the lineup Saturday.

Mets: 3B Flores didn't start, a day after he was hit in the left hand with a pitch.

Braves: RHP Aaron Blair (0-4, 7.59) tries again for his first victory in the majors. He lost to the Mets in his big league debut on April 24 and is winless in nine starts.

Mets: LHP Steven Matz (7-3, 2.71) has lost consecutive starts for the first time in his career and is winless in his last three outings. He's beaten the Braves twice this season and is 3-0 with a 1.42 ERA in three career starts against them.