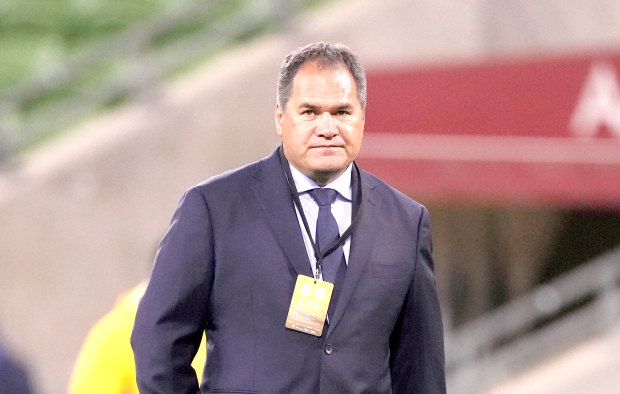 Dave Rennie, coach of the Wallabies looks on during the Rugby Union test match between the Australia Wallabies and France at AAMI Park in Melbourne, Australia, July 13, 2021. Picture taken July 13, 2021. AAP Image/Scott Barbour via Reuters

MELBOURNE: Australia will look to avoid becoming tangled in another rope-a-dope trap against France and hope to play smarter rugby to win the series-deciding third Test in Brisbane tomorrow.

The counter-punching French have been content to give up the ball to the Wallabies, who attacked with vigour in the opening Tests but shot themselves in the foot repeatedly with turnovers and handling errors.

Australia barely kicked the ball in the 28-26 loss to the French in Melbourne on Tuesday, prompting coach Dave Rennie to demand his team play with more patience.

“We’ve talked about getting balance to our game,” Rennie told reporters yesterday.

“We want to play but we also want to see opportunities to kick and turn the French around.

“So we’re pretty confident they’re going to give it back to us.”

Rennie will look for a spark from a rejigged midfield, with the combination of inside centre Matt Toomua and Hunter Paisami falling flat in Melbourne.

Toomua has been benched and Paisami shifted forward to his preferred position at inside centre.

ACT Brumbies midfielder Len Ikitau, who had a lively cameo off the bench on his debut on Tuesday, has been rewarded with a start outside Paisami.

“Lenny’s a bit different ... He’s got a great skill-set. His ability to be able to get passes out of his hand under pressure, really good feet ... He’s aggressive carrying (and) in defence.

“(He’s) got a left foot which we like to complement Hunter who can be dynamic with and without the ball and got a really good kicking game.”

The rookie midfield combination is just one of a series of selection calls saddling young players with big jobs.

Rennie’s hand has been forced to some extent by injuries and the four-day turnaround between Tests but prior to the series few would have imagined 21-year-old Noah Lolesio and 22-year-old Tate McDermott would end up the starting halves duo for the deciding clash.

Perhaps even fewer would have foreseen France taking the series into a decider after being forced to leave so many Test regulars at home due to the Top 14 final but Fabien Galthie’s rookie squad have played superbly.

They could well have gone to Melbourne with a 1-0 lead in the series but suffered a brain-fade after the siren at Lang Park when they failed to kick the ball to touch from a lineout, allowing Australia to snatch a 23-21 win with a penalty.

Melbourne was France’s first away win against Australia in 31 years and victory on Saturday would seal their first series win over the Wallabies Down Under since 1972.

The French celebrated with a rest day on Bastille Day on Wednesday and Galthie said he would wait as long as possible before deciding on a matchday squad.

They will need to break Australia’s eight-match winning streak at fortress Lang Park but confidence is unlikely to be a problem after their Melbourne breakthrough.