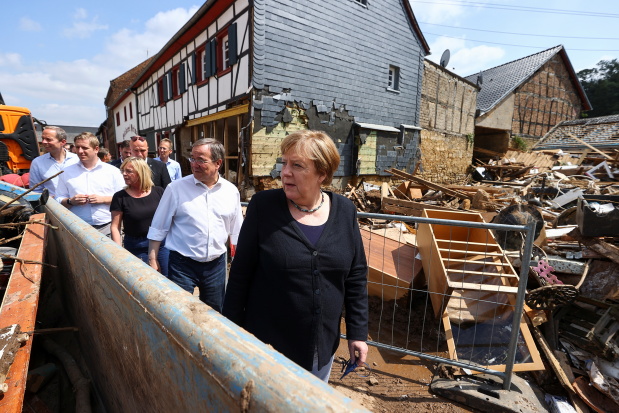 BERLIN: The German government aims to rebuild infrastructure damaged by deadly floods in the western part of the country as quickly as possible and hopes for financial support from the European Union’s solidarity fund, a draft document showed.

As the search continues for survivors of last week’s catastrophic floods which swept away houses and bridges and left at least 160 people dead, Germany is starting to count the financial cost of its worst natural disaster in almost 60 years.

The federal government plans to provide 200 million euros ($236 million) in emergency aid to repair buildings, damaged local infrastructure and to help people in crisis situations, the draft document, due to go to cabinet today, showed.

The cost of rebuilding infrastructure following floods in western Germany last week will be much higher than that after previous floods, German Chancellor Angela Merkel said yesterday.

Merkel said the government would discuss using cell broadcast flood warning systems in the future, responding to criticism that people in flood-hit areas were not sufficiently warned.

If the 16 federal states also contribute 200m, a total of 400m euros will be available in immediate aid, it said.

The government will apply to the EU for help from a fund set up to deal with natural disasters across the bloc, it said.

Just two months before a federal election, Merkel’s government wants to show it is doing all it can to restore people’s homes, livelihoods and the fabric of the flood zones.

“The federal government will do everything needed to restore the federally owned infrastructure as quickly as possible,” it said in the draft document.

“Dealing with the damage and rebuilding the infrastructure will require a major financial effort in the coming years,” it said, adding it was ready to set up a fund for future big disasters that hit several regions. The states could contribute to such a fund.

During a visit on Saturday to parts of Belgium also hit by the floods, European Commission chief Ursula von der Leyen told the communities Europe was with them. “We are with you in mourning and we will be with you in rebuilding,” she said.

Southern Germany has also been hit by floods and the state of Bavaria is initially making 50 million euros available in emergency aid for victims, Bavaria’s premier said yesterday.

“The current events in so many places in Germany show with what force the consequences of climate change can hit us all,” she told the Augsburger Allgemeine newspaper.

Currently, the government is limited in what it can do to support flood and drought prevention by the constitution, she said, adding she would favour anchoring adaptations for climate change in the Basic Law.