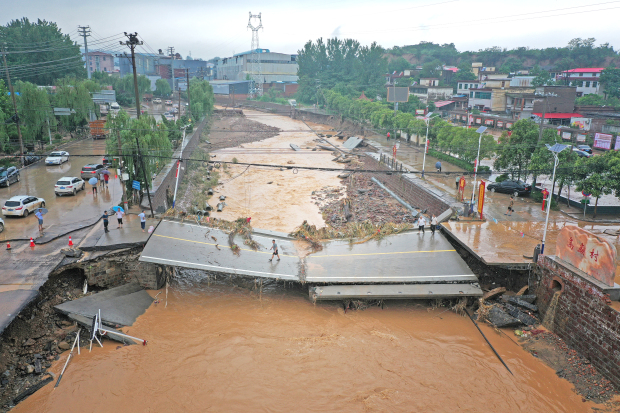 BEIJING: Tens of thousands of people were being evacuated from flood-hit regions of central China yesterday as officials raised the death toll from heavy rains that have deluged Henan province for almost a week to 33.

The provincial weather bureau raised the storm alert for four cities in the north of Henan – Xinxiang, Anyang, Hebi and Jiazuo – to red, the highest tier of a four-step colour-coded weather warning system.

More than 73,000 people were being evacuated from the city of Anyang, on Henan’s border with Hebei province, after being swamped by more than 600mm of rainfall since Monday.

Xinxiang, a small city north of Zhengzhou, recorded 812mm of rainfall between Tuesday and yesterday, shattering local meteorological records. Seven medium-sized reservoirs in the city had overflowed, affecting scores of nearby villages and towns.

As of late Wednesday, more than 470,000 people and over 55,000 hectares of crops have been affected by the Xinxiang downpours. The local government has deployed a more than 76,000-strong search and rescue team.

In neighbouring Hebei, two people were killed when a tornado struck the city of Baoding. The fatal flooding of the Zhengzou subway prompted the government to order local authorities to immediately improve urban transit flood controls and emergency responses.