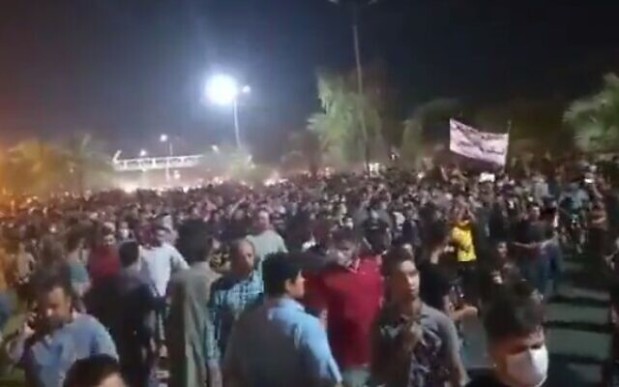 Protests sparked by a water crisis have been taking place in Iran since July 15.

The demonstrations were initially concentrated in Arab majority areas in the oil-rich southwestern Khuzestan province, where ethnic Arabs have long complained of discrimination in Iran. But they have since spread to more cities in Khuzestan, as well as to other parts of the country.

Protesters took the streets in Tabriz, the provincial capital of the northwestern East Azerbaijan province, to express support for protesters in Khuzestan on Saturday night, according to activists and footage circulating on social media.

There was heavy security presence during the protests in Tabriz and at least three citizens were arrested, reported the Human Rights Activists News Agency (HRANA), a news site run by a group of Iranian human rights advocates, yesterday.

Chants in Tabriz included “Azerbaijan supports Khuzestan” and “Azerbaijan, Ahwaz, unity, unity,” according to the videos shared on social media. Ahwaz is the provincial capital of Khuzestan.

Some of the chants heard in the videos were in the Azeri Turkish language. Iran’s three northwestern provinces – Ardabil, East Azerbaijan, and West Azerbaijan – have a predominantly ethnic Azeri population.

Protests in solidarity with Khuzestan had also broken out in the neighbouring western province of Lorestan.