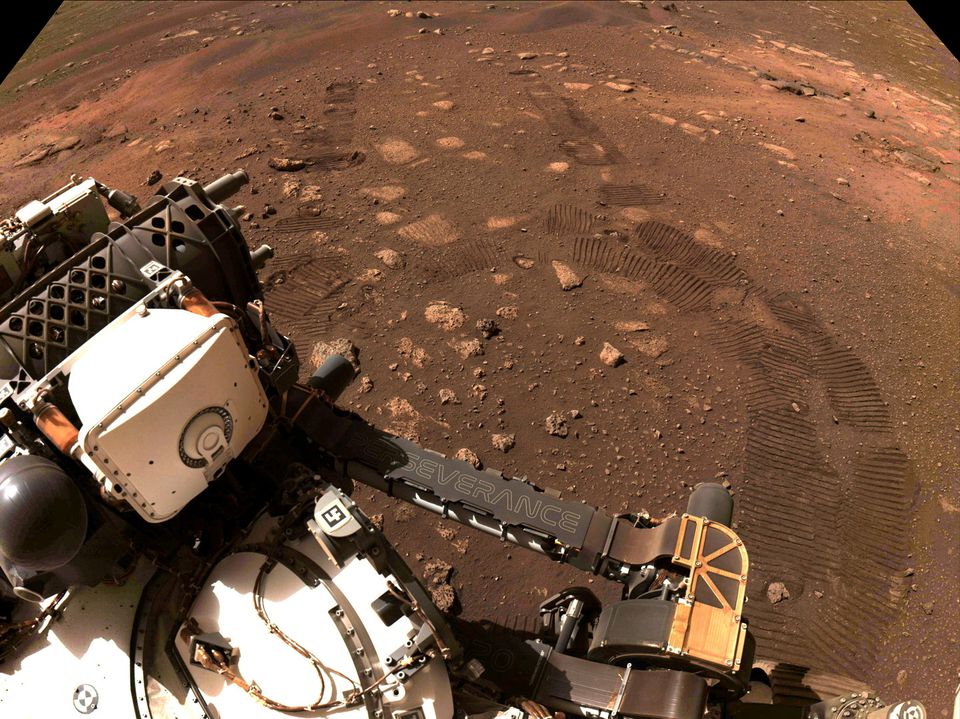 Wheel tread marks are left in the soil of Jezero Crater on Mars, as NASA's Mars rover Perseverance drives on Martian surface for the first time, in this March 4, 2021 image supplied to Reuters. Image taken March 4, 2021. NASA/JPL-Caltech/Handout via REUTERS

NASA's Mars science rover Perseverance has collected and stashed away the first of numerous mineral samples that the U.S. space agency hopes to retrieve from the surface of the Red Planet for analysis on Earth.

Tools attached to Perseverance and operated by mission specialists from NASA's Jet Propulsion Laboratory (JPL) near Los Angeles drilled a rock core slightly thicker than a pencil from an ancient Martian lake bed, then hermetically sealed it in a titanium specimen tube inside the rover.

The feat, accomplished on Sept. 1 and publicly confirmed by NASA late on Monday, marked the first such mineral sample obtained from the surface of another planet, according to the space agency.

NASA chief and former astronaut Bill Nelson hailed it as "a momentous achievement."

The space agency plans to collect as many as 43 mineral samples over the next few months from the floor of Jerezo Crater, a wide basin where scientists think water flowed and microbial life may have flourished billions of years ago.

The six-wheeled, SUV-sized vehicle is also expected to explore walls of sediment deposited at the foot of a remnant river delta once etched into a corner of the crater and considered a prime spot for study.

Mineral collection is the heart of the $2.7 billion Perseverance project.

Two future missions to Mars, to be jointly conducted by NASA and the European Space Agency, are planned to retrieve those specimens in the next decade and return them to Earth, where astrobiologists will examine them for signs of tiny fossilised organisms.

Such fossils would represent the first conclusive proof that life has ever existed beyond Earth.

Perseverance, the fifth and by far most sophisticated rover NASA has sent to Mars since its first, Sojourner, arrived in 1997, landed in Jerezo Crater in February after a 293 million-mile flight from Earth.

Success of the first sample collection, taken from a flat, briefcase-sized rock using the rotary-percussive drill at the end of Perseverance's robotic arm, was verified through imagery taken by the rover's cameras as the sample was measured, cataloged and stored, NASA said.

The rover's sampling and caching system, consisting of more than 3,000 parts, was described by JPL's interim director, Larry James, as "the most complex mechanism ever sent into space."