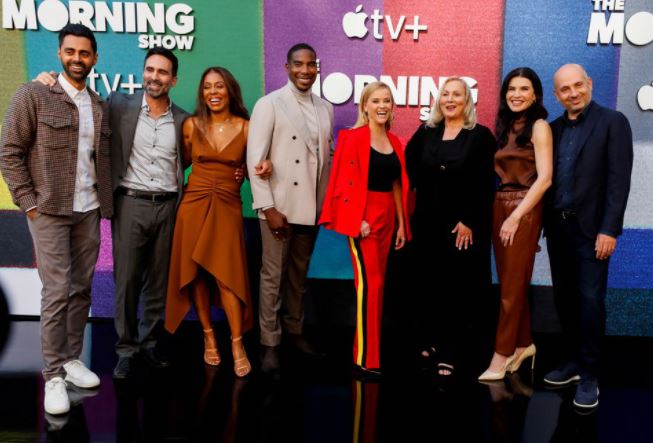 "The Morning Show," the Apple TV+ series that tackled the #MeToo movement via the lens of a fictional newscast in its first season, returns this week and explores topics from racism and homophobia to addiction and cancel culture.

The Covid-19 pandemic prompted the show's creators to rework the story for the second season, which begins streaming this Friday.

The emergence of the coronavirus became a major subject, alongside other real-world concerns.

Starring Jennifer Aniston and Reese Witherspoon, "The Morning Show" looks at the lives of people who work on a New York-based newscast and are shaken by a male anchor's sexual misconduct and executives' cover-up of bad behavior.

The new episodes pick up immediately after anchors Bradley (Witherspoon) and Alex (Aniston) exposed the network's misdeeds on live television.

Now a reluctant feminist hero, Alex takes a break to reflect and try to make peace with her actions, Aniston said in an interview. But she struggles to regroup.

"I'm not as unhinged as Alex in any way, shape or form," Aniston said of her on-screen persona. "But I've met many an Alex along the way in my life, and I remember seeing them and thinking 'don't ever let me ever become that.'"

Alex analyses her relationship with Mitch (Steve Carell), her former co-host who resigned after mistreating women and is weighing whether he can rebuild his life.

Aniston said the show's writers scripted nuanced conversations about sensitive issues and whether anyone can return from being "canceled" by a scandal.

"They really address the gray area," Aniston said. "They allow the characters to say the things that are said behind closed doors that they wouldn't dare ever say out loud. And I think it leads to really good conversations."

Bradley finds herself leading the morning newscast, but ratings are on the decline and she is working to find her true identity.

"She doesn't know where she fits," Witherspoon said. "Does work define her? Does her upbringing define her? I think it's pretty cool to have a 40-year-old woman being on this journey of self-discovery."

The actress has publicly advocated for equal treatment of women and had served on an advisory board for Time's Up, the group founded to fight sexual harassment in the workplace.

Time's Up's CEO and members of its board of directors recently resigned amid controversy over the group's ties to politicians and corporations. The advisory board was disbanded.

Witherspoon said she was "really encouraged" that the steps would make way for new leadership that can "continue to grow and strengthen the organisation."

"The most important thing is Time's Up has an incredible mission at its centre, to really create equity and disrupt systems that created discrimination and harassment," she said. "It's imperative that it continues because women are still faced with these issues every single day."