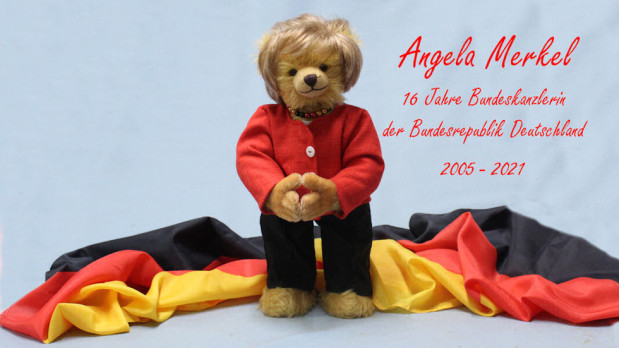 A German toymaker is producing a batch of commemorative teddy bears to mark the end of Angela Merkel’s time as chancellor, and they have sold out before she has even left office.

The handmade bears come complete with their hands resting in the ‘Merkel rhombus’, the chancellor’s trademark pose with thumbs and fingers lightly bracing together that have become a symbol of her calm leadership.

“The customers love it, this edition is already sold out. We have a very long waiting list as we sold the first batch of 500 in just a few days,” said Martin Hermann, managing director of Hermann-Toys, a family business that has been going since 1920.

With a 180-euro price tag, the toys are not cheap but Hermann says the cost reflects the hours of work that goes into making the bears, which sport Merkel-style hair and are dressed in her habitual trousers-and-jacket combination.

“The bear is entirely made here and takes about four hours per bear,” Hermann said from the business in Coburg in northern Bavaria.

Merkel, in power since 2005, did not seek re-election and is planning to stand down once a new German government takes office. That could take weeks or even months as tricky coalition talks are just beginning.