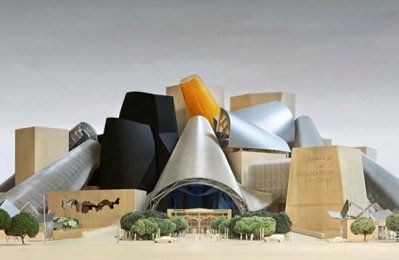 Six Construct, a subsidiary of leading Belgian construction company Besix, said its joint venture with UAE-based Trojan General Contracting has won the deal to build the landmark Guggenheim Abu Dhabi museum on the Saadiyat Island.
Six Construct said the scope of work includes all construction work, except for the foundations, which have already been completed.
The building is made of various materials, including steel, concrete, wood and aluminum. The construction process has been carefully prepared by the joint venture partners to optimise planning, methods and procurement. Work is set to be completed in 2025.
This museum, which is located on Saadiyat Island and borders on the Arabian Gulf on three sides, will be the largest of the four Guggenheim museums (New York, Venice and Bilbao) and will strengthen the UAE capital's position as a global centre for arts and culture.
The outstanding architecture of the building is the work of the award-winning and world-renowned architect Frank Gehry. It features a series of asymmetrical cones which surround the main building and serve as both entrances to the museum and outdoor exhibition spaces.
The design also incorporates sustainable elements appropriate to the region, including the natural cooling and ventilation of the covered courtyards, inspired by the concept of traditional wind towers found throughout the Middle East.
The monument will be part of the Saadiyat Cultural District, an emerging global cultural centre with a concentration of iconic museums, galleries, and performance venues.
Besix Deputy CEO Pierre Sironval said: "We are extremely proud to build the Guggenheim Abu Dhabi, a museum of global modern and contemporary art that will further enhance the appeal of Abu Dhabi as a destination. The museum joins the group's previous achievements in Abu Dhabi, including Sheikh Zayed Grand Mosque, Emirates Palace and the Sheikh Zayed Bridge."
"We have also had the honor of constructing the Dancing House, designed by Frank Gehry, in Prague," he stated.
On the project, Besix-Six Construct General Manager Olivier Crasson said: "This is a particularly complex yet very sustainable building, which will benefit from our engineering and construction expertise. Together with Trojan, a high-quality partner, we will make it a great success for our client and Abu Dhabi."
A UAE-based group, Trojan is the subsidiary of Alpha Dhabi Holding, a regional conglomerate with interests in construction, health care, hospitality and industry.
In collaboration with the Solomon R. Guggenheim Foundation, the museum will present a collection from all four corners of the world (including art since 1960) with a specific focus on West Asia, North Africa, and South Asia.
The museum will also serve as a forum for academic research and intellectual and cultural dialogue, engaging artists, scholars, curators, architects and innovative thinkers.-TradeArabia News Service