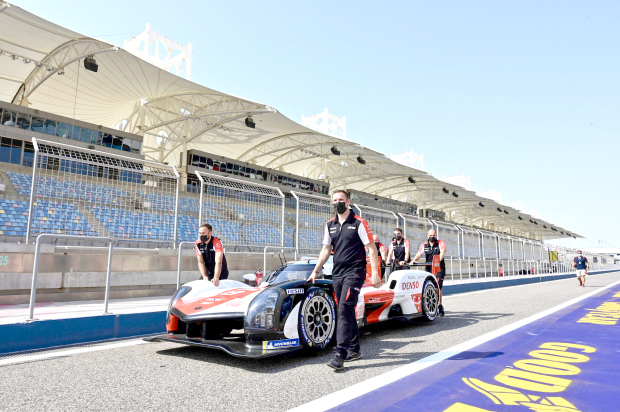 Bahrain International Circuit (BIC) will witness motorsport history over the next two weeks in the first-ever FIA World Endurance Championship double-header in Sakhir.

With all championship titles set to be decided over this season finale, the races will also create history as the championship’s first-ever double-header.

Championships in all four race classes – Hypercar, Le Mans Prototype (LMP) 2, Le Mans Grand Touring Endurance (LMGTE) Pro and LMGTE Am – are up for the taking as the 32-car grid lines up along BIC’s Main Straight for the last two events of this campaign.

Valuable points will be won in each race, which will eventually determine who will be crowned at ‘The Home of Motorsport in the Middle East’ by season’s end.

Today, action will begin behind closed doors with a 90-minute Practice for the WEC competitors.

Toyota Gazoo Racing’s drivers’ success translates to the Hypercar World Endurance Championship for teams. They are currently first with 141 points, while Alpine Elf Matmut are second on 90 points and Glickenhaus Racing third with 37 points.

An exciting three-way fight for the FIA Endurance Trophy for LMP2 Drivers has been brewing all season long, and it has become the closest-contested trophy heading into the last two races in Bahrain.

Leading with 89 points apiece are Sean Gelael-Stoffel Vandoorne-Tom Blomqvist, but they are just a single point ahead of the trio of Charles Milesi-Ferdinand Habsburg-Robin Frijns. Eight points behind the leaders in third are Anthony Davidson-Antonio Felix Da Costa-Roberto Gonzalez.

JOTA’s #28 car (Gelael-Vandoorne-Blomqvist) are the pace setters in the FIA Endurance Trophy for LMP2 Teams with 89 points, just a point ahead of Team WRT (Milesi-Habsburg-Frijns). JOTA’s #38 car (Davidson-Da Costa-Gonzalez) are third on 81 points.

The trio of Ben Hanley-Henrik Hedman-Juan Pablo Montoya lead the FIA Endurance Trophy for LMP2 Pro-Am Drivers with 110 points. In second is Frits Van Eerd with 104 points, while third are Esteban Garcia and Norman Nato with 101 points.

Setting the pace in the race for the GT FIA World Endurance Drivers’ Championship are the pair of Alessandro Pier Guidi and James Calado with 124 points. Kevin Estre and Neel Jani are second on 112 points, while third are Gianmaria Bruni and Richard Lietz with 75 points.

In the FIA Endurance Trophy for GTE Am Drivers standings, leading are the trio of Alessio Rovera-Francois Perrodo-Nicklas Nielsen with 102 points. Ben Keating-Dylan Pereira-Felipe Fraga follow with 65.5 points, while third are Antonio Fuoco-Giorgio Sernagiotto and Roberto Lacorte third with 54 points.

For the FIA Endurance Trophy for GTE Am Teams championship, the AF Corse #83 crew (Rovera-Perrodo-Nielsen) are in first place with 102 points. TF Sport (Keating-Pereira-Fraga) are second with 65.5 points, while Cetilar Racing (Fuoco-Sernagiotto-Lacorte) are third with 54 points.

Tickets are available for tomorrow and Saturday at just BD5 for adults (BD8 for both WEC events) and BD2.5 for children aged 3 to 12 (BD4 for both events). Kids under three are free, whilst there are also further discounts available for students, those with special needs and senior citizens.

Ticket prices offer one of the most affordable ways to witness a World Championship motorsport event. Full details are available at bahraingp.com.

For full eligibility criteria for those wishing to buy tickets to enjoy the races, or for other information on the highly anticipated events, visit BIC’s official website bahraingp.com or call the BIC Hotline on +973-17-450000.