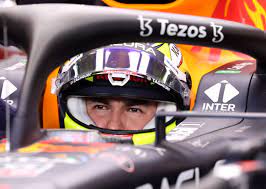 MEXICO CITY: Formula One leader Max Verstappen, along with tens of thousands of fervent fans, will be hoping to see Red Bull team mate Sergio Perez stand on his home Mexican Grand Prix podium for the first time on Sunday.

Verstappen is favourite at the Autodromo Hermanos Rodriguez and a perfect one-two with Perez would put even more of a gap between him and Mercedes’ seven-times world champion Lewis Hamilton.

The Dutch driver is 12 points clear of the Briton after 17 of 22 races, with Mercedes 23 ahead of Red Bull in the constructors’ standings going into a run of three races on successive weekends.

“It’s incredibly important for myself and the team to try and nail the next three races now that we are fighting for the championship,” Verstappen said.

Mexico City could see him take a decisive step towards a first title and realise a dream for Perez, who has never finished higher than seventh at home but now has a winning car.

Perez has won twice in the last 12 months, the first with Racing Point (now Aston Martin) in Bahrain last December, and will be racing at home for the first time as a winning F1 driver.

“It’s just great to finally have a team and a car that we can dream of a victory in my home country,” said the Mexican.

“We have a chance to make a big result happen this weekend, so I will prepare as well as I can and we will see what we are able to achieve.”

Team player Perez knows, however, that something will have had to go awry for Verstappen for him to be in with a shout of winning, given the tight championship battle and importance of every point.

Verstappen won the last round in Texas, something of a Mercedes stronghold over the years, with his team mate finishing third.

Both Hamilton and Verstappen have won twice in Mexico, the Briton most recently in 2019 with the 2020 race cancelled due to the Covid-19 pandemic.

The pair are the only drivers on the current grid to have tasted victory in Mexico, whose race returned to the calendar in 2015.