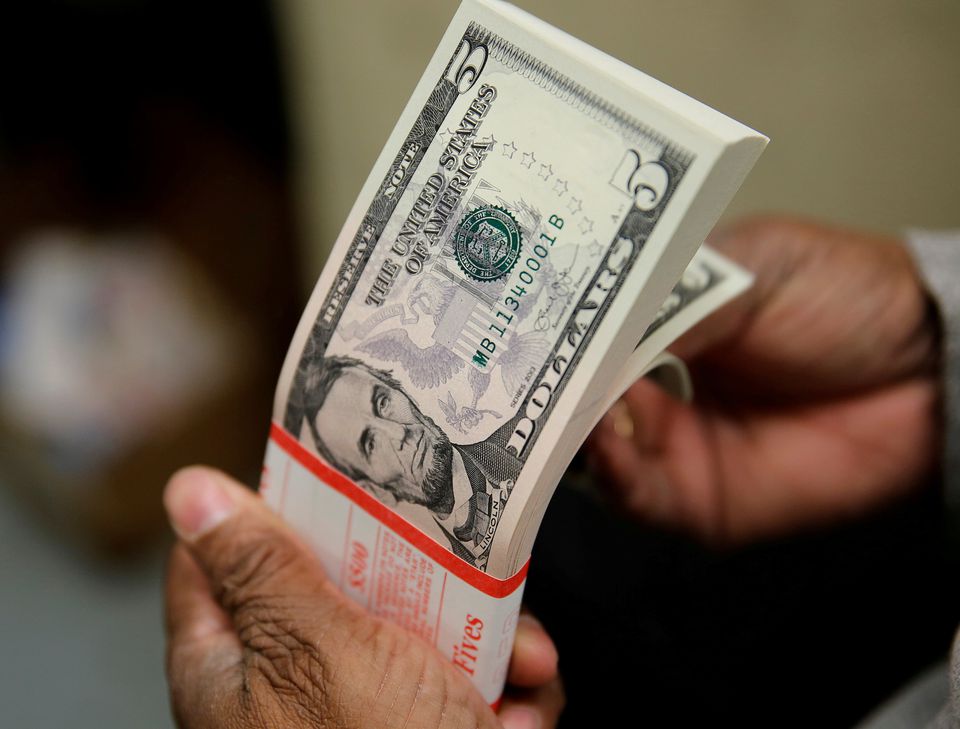 A packet of U.S. five-dollar bills is inspected at the Bureau of Engraving and Printing in Washington March 26, 2015. REUTERS/Gary Cameron//File Photo/File Photo

The dollar rose to 16-month highs against the euro and other currencies on Thursday, and the yen fell back towards multi-year lows, after the hottest U.S. inflation reading in a generation encouraged bets on interest rate hikes.

US consumer prices grew last month at their fastest annual pace since 1990, data showed, and traders think the Federal Reserve could respond by lifting interest rates faster than peers in Europe and Japan.

The euro was pummelled, as the European Central Bank is seen lagging on policy tightening. It slipped further to $1.1459 on Thursday, its lowest since July 2020.
Sterling was also marginally down on Thursday at a new 11-month low of $1.3388, with better-than-expected GDP data in Britain doing little to support the pound.

The yen extended a sharp reversal of recent gains to 114.15 per dollar -- close to the Japanese currency's four-year low of 114.69 reached last month. The Australian and New Zealand dollars recorded one-month troughs.

Analysts said the sharp rise in U.S. government bond yields, including the 30-year Treasury passing 1.5%, was behind the dollar's jump.

"Whether investors will drive the EUR-USD drop towards the next support levels at around $1.1425 and $1.1380 will be the major test for the FX market today," said UniCredit analysts.

"However, this test will likely also depend on the further rise in long-term UST (U.S. Treasury) yields and the consequent additional widening of yield spreads between USTs and German Bunds."

After the surge in Treasury yields, which rise when prices fall, the difference between five-year U.S. yields and yields at the same tenor in Japan and Germany is wider - in favour of Treasuries - than at any time since early 2020.

Emerging-market currencies have also suffered from the dollar's broad rise, with MSCI's EM currencies index suffering its sharpest drop in two months.
A jobs report in Australia showed an unexpected rise in unemployment.

"From an FX standpoint we are in a stand-off," said Deutsche Bank strategist Alan Ruskin.

"On the dollar we have the classic dilemma - if Fed won't respond to high inflation, it is dollar negative; if the Fed brings forward tightening, it is USD positive. Right now the dollar is broadly stuck between these two worlds."