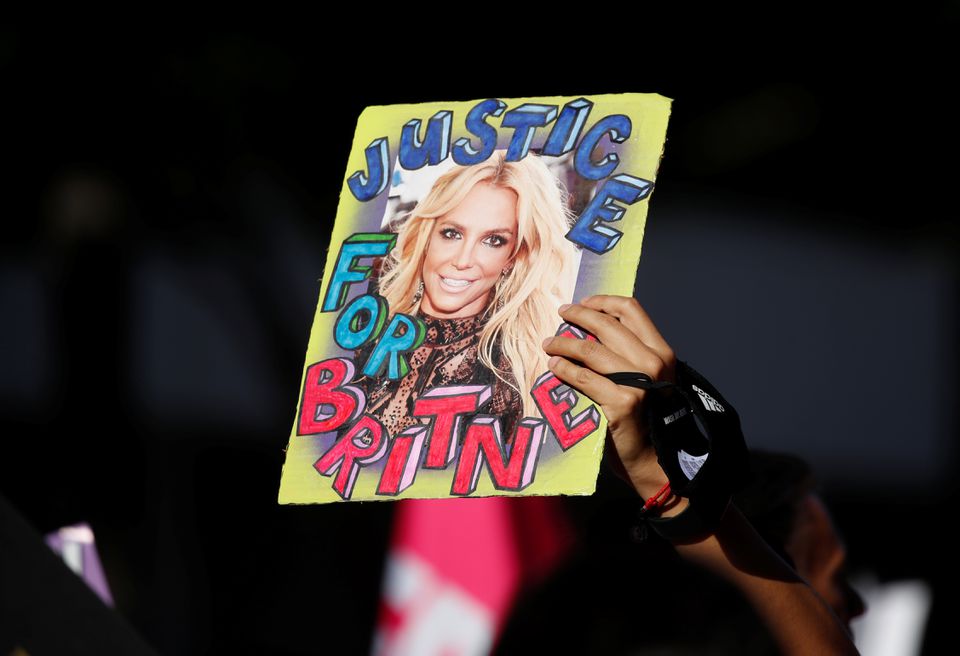 A supporter of singer Britney Spears holds up a picture of the pop star with the words "Justice for Britney" during celebrations for the termination of her conservatorship, outside the Stanley Mosk Courthouse in Los Angeles, California, U.S. November 12, 2021. REUTERS/Mike Blake

Pop star and actress Lady Gaga on Saturday celebrated singer Britney Spears' release from a conservatorship imposed more than a decade ago after a mental health breakdown, calling Spears an inspiration who was treated badly by the music industry.

Gaga, who has said she also struggles with mental health issues including trauma from a sexual assault by a music producer when she was only 19, spoke to Reuters about Spears while attending the red-carpet premiere of the film "House of Gucci" in Milan on Saturday.

"She is wildly talented, she is incredibly inspirational and I am just so happy that we get to celebrate today, that she gets to embark on a new phase of her life," Gaga said of Spears.

Spears won back her freedom on Friday after 13 years under a conservatorship that controlled how she spent her money, when she performed, who had access to her house and the medications she took.

Her efforts drew international attention as fans pressed for her release from the conservatorship and her situation was highlighted in films.

Gaga, who created the Born this Way Foundation for people struggling with mental health issues, said Spears, a former teen phenom who became an international pop star, was not treated well by the music industry after a breakdown in which she shaved her head and soon after entered a rehab center.

In fighting to be released from the conservatorship, Spears "authored her freedom," Gaga said. "She worked hard for this moment and I hope she feels that.”