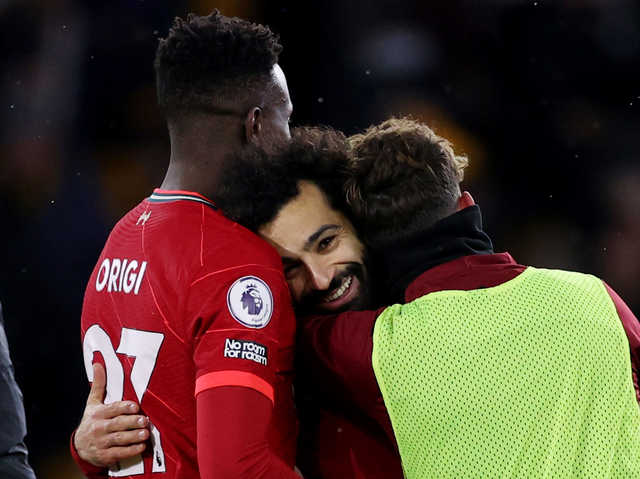 WOLVERHAMPTON - Liverpool's Divock Origi came off the bench to score a brilliant injury-time winner and send his side top of the Premier League with a 1-0 win at Wolverhampton Wanderers on Saturday.

Origi picked up a cross from Mohamed Salah before swivelling and drilling the ball home in the 94th minute, sending the Liverpool fans into raptures and sparing his usually lethal fellow strikers' blushes after they missed a hatful of chances.

"We came here to win and eventually it happened, that's why we do the hard work in the week for this," a grinning Origi said, adding that Liverpool manager Juergen Klopp had sent him on with the instruction: "Be Divock."

The win took the Reds into first place on 34 points after 15 games, a point above Chelsea following their 3-2 defeat nL1N2SP08J earlier in the day at West Ham United.

Manchester City could leapfrog them both, however, if they pick up three points at Watford in Saturday's late game.

Divock's winner came after an extraordinary miss by Diogo Jota, back at his old club on his 25th birthday.

The Portuguese striker and former Molineux favourite looked certain to score on the hour after a defensive mix-up left him free with the goalkeeper stranded, but Wolves captain Conor Coady produced a spectacular - and painful - block on the line.

With Liverpool dominating possession but wasteful with their finishing, Trent Alexander-Arnold blazed over, Salah saw the ball nicked off him with the goal gaping, and Thiago Alcantara had a double shot blocked at close range.

'GIVE THE BALL TO DIVOCK'

"We missed massive chances," said Klopp, praising his players for handling the cold and wind and reserving a special endorsement for Origi, who features mainly as a substitute given Liverpool's attacking riches.

"Give the ball to Divock was the plan," Klopp said of his late tactical switch. "He's an incredible striker. I love the player. His skills are outstanding. He's one of the best finishers I’ve seen in my life.

"We played a lot of good stuff. The longer the game goes and it's still nil-nil, you feel the pressure because we wanted the win so badly."

Undeterred by Liverpool's pressure, Wolves also threatened repeatedly on the counter-attack and could have taken the lead before the late denouement.

But Raul Jimenez fired over the bar and Adama Traore was just beaten to the ball by Liverpool goalkeeper Alisson after a slick passing move.

Wolves, who have now lost their last 10 Premier League games against Liverpool, sit eighth in the league on 21 points.

Origi had no complaints about his late appearances under Klopp. "I just play the game of football and enjoy it, if it's as a sub or as a starter. I enjoy winning games and try to contribute as much as possible in each and every way."

Liverpool have now scored 13 game-winning goals in the 90th minute or later in the league under Klopp, four more than any other side in the competition since the German arrived in 2015.

"They are the best side in the world," said gracious Wolves manager Bruno Lage.