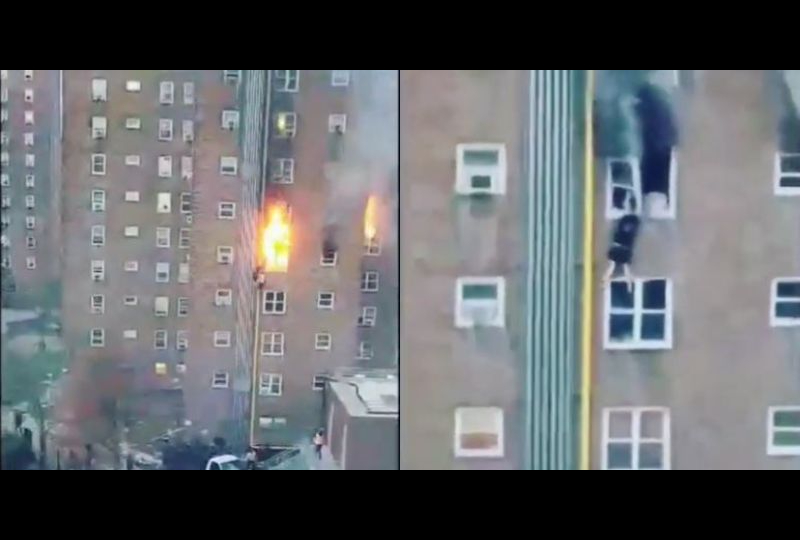 Two teenagers escaped from a building that caught fire by dangling from a window in New York.

A video captured the teenagers’ miraculous escape as they managed to slide down a pole, descending four stories from the building in East Village, Manhattan on Thursday.

The 13-year-old boy and 18-year-old female survived the incident but sustained injuries.

Yesterday morning 2 teens—a 13 and 18-yr-old— escaped a burning building in East Village, NYC. In the video you can see the first teen hanging from the window then stand up and hold on to a pole and help the second person.
(1/2)

The video shared by a GoodNews correspondent shows the female hanging from the window on the fifth floor as thick smoke kept billowing.

After a few seconds, she manages to jump to a nearby pole.

Then she helps the boy escape through the window. The fire rages inside the room as they slide down the slender pole, one after the other.

The fire was caused by lithium-ion batteries from an electric bike.

A young man was killed in the fire and a woman was critically injured and admitted to the hospital, according to the New York City Fire Department (FDNY).

NYFD said 93 lithium-ion battery fires were reported this year, more than 70 injuries and four deaths caused by them.

“We are urging people not to charge these in areas of egress, places where people are sleeping. I would prefer if they were charged outdoors or in an unoccupied space,” he said.