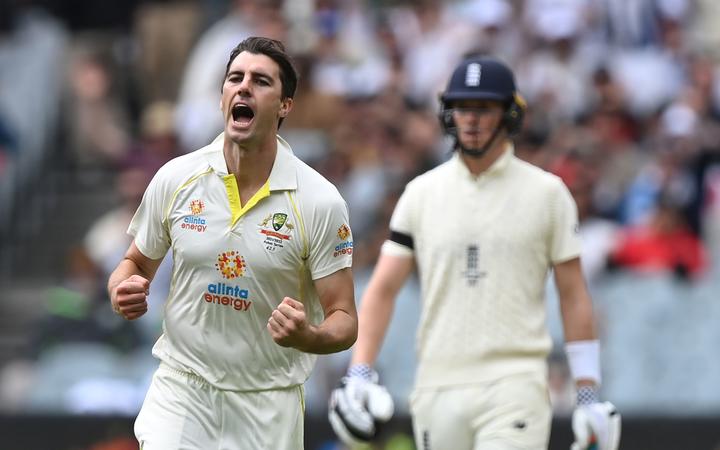 MELBOURNE: England’s hopes of keeping the Ashes alive plunged yesterday as their batsmen again capitulated on a dismal opening day of the third Test against Australia in Melbourne.

Sent in to bat on a grassy wicket after returning Australia captain Pat Cummins won the toss, England were skittled for 185 to the delight of a festive Boxing Day crowd, leaving the tourists’ bowlers with an improbable rescue mission.

By stumps, that mission appeared doomed, with Australia having pushed to 61 for one on the strength of a quickfire 38 by David Warner.

Marcus Harris was 20 not out and nightwatchman Nathan Lyon yet to score.

Leading 2-0 after thumping wins in Brisbane and Adelaide, holders Australia need only a draw in Melbourne to retain the urn.

But Cummins’ men will be hell-bent on taking the series outright before the New Year Test in Sydney.

Only one team has ever turned around a 2-0 deficit to win the Ashes. That was Don Bradman’s Australia, winning the 1936/37 series 3-2 on home soil.

England could do little to repel Cummins, whose pace bowling accounted for three wickets in the morning.

But several soft dismissals after lunch crushed England’s hopes of salvaging a respectable total while highlighting the team’s batting fragility this series.

Though Root chalked up his ninth half-century in Australia, he was culpable in his dismissal for 50, caught behind with a loose drive at a Mitchell Starc delivery.

The England captain now shares with former Australia opener Bruce Laird the unenviable record of the most Test fifties in Australia without making a century (9).

England’s rejigged opening partnership of Zak Crawley and Haseeb Hameed lasted 12 balls before Cummins had Hameed caught behind for a duck.

The Australia skipper bagged his third wicket in the last over before lunch, with Dawid Malan (14) edging to the slips to break a budding 48-run partnership with Root.

Bairstow battled for his 35 before going on the offensive in the search for quick runs as his batting partners dwindled.

He was out trying to duck a venomous Starc delivery that caught his bat and looped to gully, where Green dived forward to take a terrific catch.

Boland, the second indigenous Australian to play for the men’s Test side, opened his account by trapping Mark Wood lbw for six.

“I think their batters were pretty conscious of wanting to leave the ball so we just tried to keep attacking as much as we could,” said Boland.

Spinner Lyon cleaned up the tail to finish with 3-36.

Australia’s openers raced to 57 before veteran paceman James Anderson broke through, having Warner edge to Crawley at gully.

All-rounder Stokes did his best to soften up Harris in a fiery late spell and drew blood from the opener’s finger after rapping him on the glove.

But Harris survived and nicked Stokes’s final ball just wide of the slips for four, capping a forgettable opening day for England.