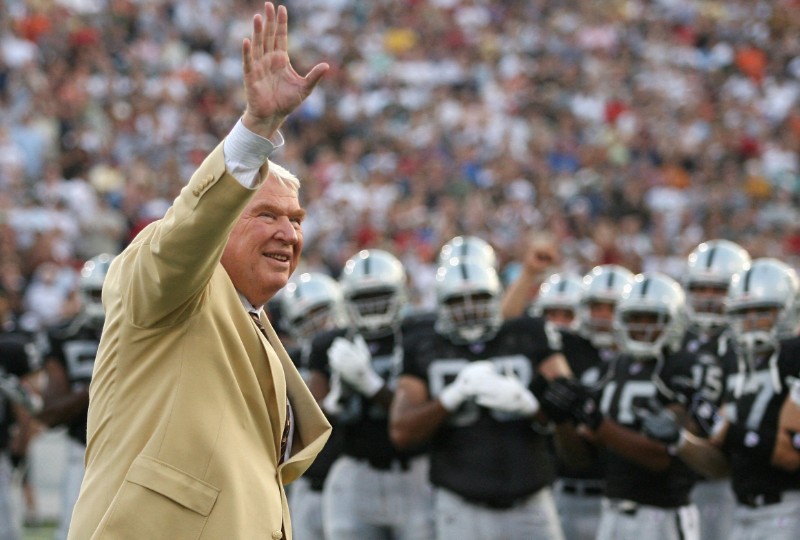 Hall of Fame coach and broadcasting icon John Madden died on Tuesday. He was 85.

The NFL said Madden died unexpectedly. No cause of death was revealed.

"On behalf of the entire NFL family, we extend our condolences to Virginia, Mike, Joe and their families," said NFL Commissioner Roger Goodell, referring to Madden's wife and two sons. "We all know him as the Hall of Fame coach of the Oakland Raiders and broadcaster who worked for every major network, but more than anything, he was a devoted husband, father and grandfather.

"Nobody loved football more than Coach. He was football. He was an incredible sounding board to me and so many others. There will never be another John Madden, and we will forever be indebted to him for all he did to make football and the NFL what it is today."

Madden won Super Bowl XI with the then-Oakland Raiders when they rolled through the 1976 regular season with a 13-1 record. The team won three postseason games, including a convincing 32-14 victory over the Minnesota Vikings in the Super Bowl.

"The Raiders Family is deeply saddened by the passing of the legendary John Madden," the team said in a statement. "Few individuals meant as much to the growth and popularity of professional football as Coach Madden, whose impact on the game both on and off the field was immeasurable."

The Raiders won 10 or more games six times under Madden.

Longtime Raiders receiver Tim Brown arrived nine years after Madden's retirement from coaching but is well aware of his impact.

"Wow, sitting around Saturday afternoon, I had the chance to watch the John Madden documentary, a story I'm very familiar with, but it was great to hear the stories and see the legend that John Madden really is. Truly the GOAT! RIP!," Brown said on Twitter.

Dallas Cowboys owner Jerry Jones said there was nobody as important as Madden when it came to the NFL.

"I am not aware of anyone who has made a more meaningful impact on the National Football League than John Madden, and I know of no one who loved the game more," Jones said in a statement. "When I think of a person of sports who is worthy of the term 'larger than life,' I have always thought of John. And I always will."

The pairing of Madden with Pat Summerall at CBS is regarded as the one of the top announcing duos in sports television history.

Madden was inducted into the Pro Football Hall of Fame in 2006.

He also was heavily involved in the "Madden NFL" video game series, published by EA Sports since 1988.

Madden played college football at Cal Poly -- he played both offensive and defensive tackle -- but a knee injury prevented him from getting an NFL career going after being drafted in the 21st round by the Philadelphia Eagles in 1958. He got into coaching in 1960 at Allan Hancock Junior College in Santa Maria, Calif.

After four seasons at Allan Hancock -- the last two as head coach -- he joined the San Diego State staff as defensive coordinator under legendary Don Coryell. Madden regularly cited learning under Coryell as one of the biggest factors in his coaching development.

After three seasons (1964-66) at San Diego State, Madden was hired as the Raiders' linebackers coach. Two seasons later, he was promoted to head coach.

Madden also was regularly distressed while flying due to some of his former college teammates dying in the 1960 Cal Poly football team plane crash in Toledo, Ohio. Of the 22 people who died in the crash, 16 were football players. One of the survivors was future college head coach and NFL offensive coordinator Ted Tollner.

Madden's dislike of flying was so intense that he spent most of his television career traveling in a bus known as the "Madden Cruiser."

Reaction was quick and to the point -- similar to Madden's broadcasting style -- on social media.

--Hall of Fame quarterback Kurt Warner: "I always loved sitting down & talking with the Legend #JohnMadden -- he was larger than life in the NFL world... but what left a larger impression upon me was the character of the man! Honored to have played in last SB he would call in the booth... We love u & we'll miss you Coach!"

--Hall of Fame running back Jerome Bettis: "RIP to an incredible man and coach, John Madden. My thoughts and prayers are with his loved ones and Raider Nation."

--Future Hall of Fame running back Adrian Peterson: "An icon to the game of football. Rest In Peace."

--Former CBS Evening News Anchor Dan Rather: "Few approached life with the joy of legendary football coach & broadcaster John Madden. A colleague at CBS, he was a gentleman with a boisterous sense of humor. On the sidelines & in the booth, this voluble mountain of energy was a trailblazer. A golden era ends with his passing."

The NFL said it will announce memorial service information when it is available.