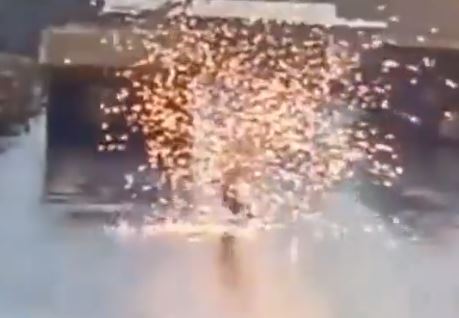 A 35-year-old security guard Abdul Rosyid was struck by lightning in a shocking incident, that only left him with minor burns.

The incident, which was caught on CCTV cameras in Jakarta, Indonesia, has since gone viral.

The video shows the on-duty guard walking in an open area, holding an umbrella.

A few seconds later, he is struck by lightning and the sparks light up the CCTV camera.

Security officer in Jakarta was struck by lightning while on duty, avoid using radio and cellular telephones when it is raining, the condition of the victim survived after 4 days of treatment. not everyone has the same chance to live. 当選確率 #Bitcoin #NFTs $BTC $ETH #ALERT pic.twitter.com/4XhW6Oh3U9

Once the sparks die down, he is seen struggling to stand and falls down; his colleagues are then seen rushing to his side.

According to reports, Abdul was rushed to a hospital where he was treated for his injuries and is now resting at home.