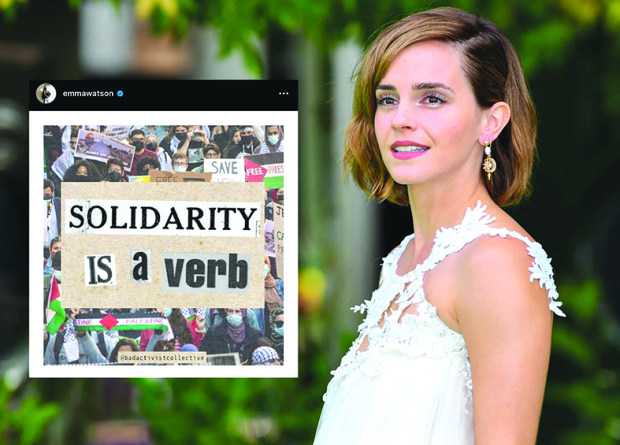 LONDON: British actor Emma Watson has taken to social media to share a message in support of the Palestinian movement, leaving many pro-Palestinian netizens both surprised and elated at the move.

The 31-year-old – who rose to fame for her portrayal of Hermione Granger in the Harry Potter movies – reposted a post originally shared by the Bad Activist Collective on Instagram on January 2.

The post includes a picture showing pro-Palestinian supporters with the quote “solidarity is a verb”. The post’s caption included a poem by British-Australian scholar Sara Ahmed about what solidarity truly entails.

Watson’s move has received worldwide attention. Pro-Palestinian supporters on social media have hailed her support for the cause.

“Two days ago, a new post appeared on Emma Watson’s Instagram, an account followed by 64.3 million people. It showed what appears to be a protest in support of the people of Palestine, overlaid with a collage reading “solidarity is a verb”. The caption includes a quote on the true nature of solidarity from intersectional feminist academic Sara Ahmed, and explains that the image is a repost from Bad Activist Collective,” British newspaper The Independent wrote in an editorial.

The paper also wrote that predictably, it didn’t take a minute for Danny Danon, head of global operations for right-wing Israeli party Likud, and former Israeli ambassador to the UN, to accuse Watson of anti-Semitism on Twitter.

The Israeli government, like all governments across the world, should be held accountable for its decisions and actions. According to Human Rights Watch, the Israeli government enforces “severe and discriminatory restrictions on Palestinians’ human rights”. Israeli settlements in East Jerusalem and the occupied West Bank are described by the UN as illegal and “trampling” on international human rights law.

In the Occupied Palestinian Territories, two million Palestinians are food insecure. In Gaza, access to territorial waters for fishing is restricted, and there are sweeping restrictions on the movement of people and goods in and out of the area. There is not enough water to drink, cook with or wash in. Israel controls 85 per cent of Palestinian water sources.

There have been 3,572 conflict-related deaths of Palestinians over the last 10 years, including 806 children. There have been 198 conflict-related deaths of Israelis, including 14 children. The UN recorded that, in the first six months of 2021, Israeli authorities have demolished, seized or forced the demolition of at least 421 Palestinian-owned buildings, displacing 592 people (320 of them children) across the West Bank.

The immense suffering of Palestinian people living under occupation should not be up for debate. It is factual.

Criticism of Israel and its policies, and the recognition of the way Palestinian rights are being routinely trashed, is not inherently anti-Semitic. It can be, in the use of anti-Semitic tropes and language, but the broad conflation of caring about human rights abuses perpetuated by the Israeli government with hatred of Jewish people as a whole is extremely unhelpful and wrong in the face of an ongoing humanitarian crisis.

In the words of the late Archbishop Desmond Tutu, whose support for the rights of the Palestinian people was so conveniently ignored in many tributes after his death: “Those who turn a blind eye to injustice actually perpetuate injustice. If you are neutral in situations of injustice, you have chosen the side of the oppressor.”

Fair play to Emma Watson. The post on her Instagram remains up, unlike previously supportive statements of Palestinian rights from Rihanna, Kendall Jenner and Paris Hilton, which were deleted. Solidarity with the people of Palestine should not be viewed as an untouchable cause, shrouded in silence. Their suffering must be acknowledged and brought to light, without holding Judaism or Jewish people as a whole responsible. Surely this distinction is not too difficult to grasp.