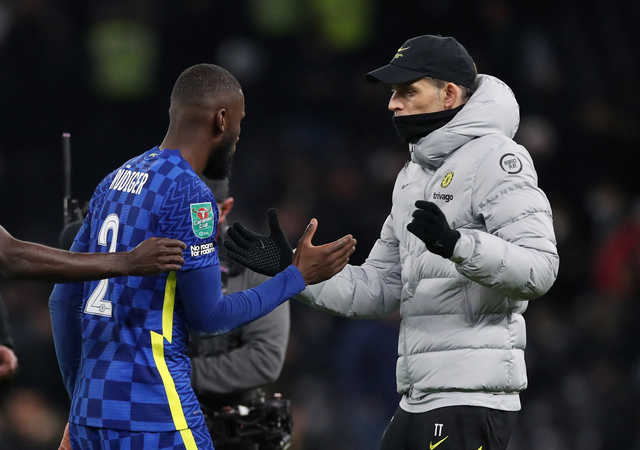 London - Thomas Tuchel has been in charge of Chelsea less than a year but such has been his impact that on Wednesday he became the first manager in the club's history to take the club to each of the League Cup, FA Cup and Champions League finals.

They completed a 3-0 aggregate win over Tottenham Hotspur in the League Cup semi-final on Wednesday, yet such are the standards Tuchel has set since replacing Frank Lampard last January that he was unhappy with his side's display in north London.

Antonio Rudiger's bundled goal after 18 minutes made almost certain of a Wembley final against either Liverpool or Arsenal as Chelsea dominated the first half as they did the first leg.

But they became distracted as Tottenham had two penalties overturned by VAR either side of halftime and a Harry Kane goal ruled out for offside.

The difference in quality between the two teams was evident not just on the pitch but also on the bench where Tuchel had the luxury of leaving N'Golo Kante, Thiago Silva, Christian Pulisic, Hakim Ziyech and Kai Havertz.

All would waltz into Tottenham's current first team, yet Chelsea did offer Spurs some hope in the second half as they took their eye off the ball.

Tuchel knows better teams would punish such sloppiness and he will not tolerate a repeat at Manchester City on Saturday when defeat will surely knock them out of the title race.

"We lost a bit of control, focus, some important duels and were lucky that suddenly we didn't concede," Tuchel, who lost last season's FA Cup final but won the Champions League, said.

"We were a bit sloppy and weren't full aware of the danger. I had the feeling on the touchline we were playing with fire.

"Second half again, strong start for 15 minutes but again the same story. We had many ball losses, lost many challenges.

"So big space to improve, it wasn't a super bad game, but it was an okay game and there were some moments and minutes that were good. But there are some that need huge improvement."

Tottenham can only dream of reaching Cup finals without playing well, as their trophy drought that stretches back to 2008 when they beat Chelsea in the League Cup final goes on.

While they will rue the VAR decisions -- all correct -- they are a team requiring extensive surgery.

Had Chelsea been more ruthless in the first half it could have been a humiliation, although manager Antonio Conte praised the way his team responded in the second half.

"The first half we struggled a bit, especially the way to try to bring pressure without the ball. In the second half the performance was good, the intensity was high. I think we deserved a better final result today.

"But I think after two games Chelsea deserved to reach the final in this competition."