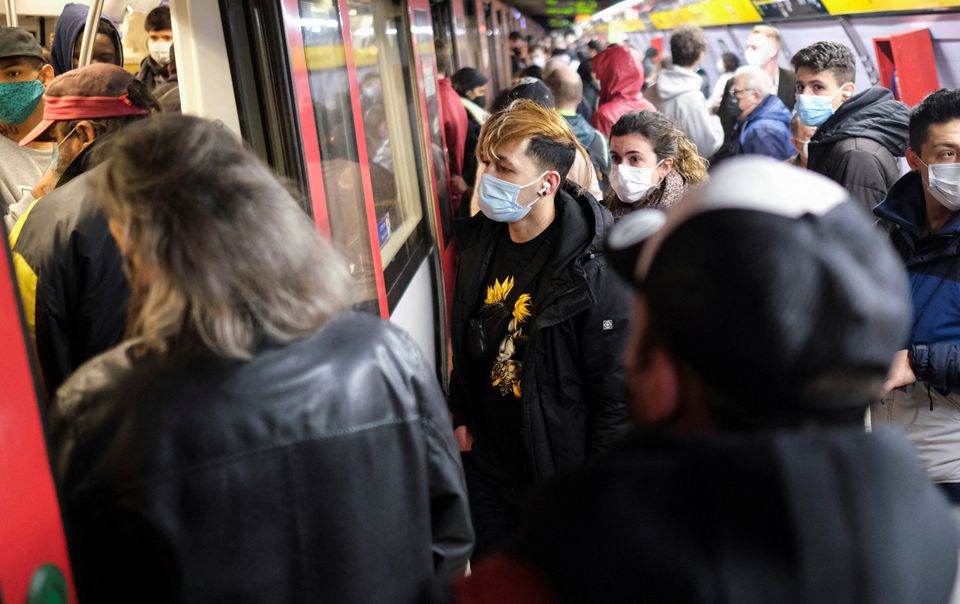 Commuters wait for the train at the subway station amid the outbreak of the coronavirus disease (Covid-19) in Barcelona, Spain January 12, 2022. - Reuters Photo

The European Commission said that between 60% and 80% of the EU population was estimated to have been infected with Covid-19, as the bloc enters a post-emergency phase in which mass reporting of cases was no longer necessary.

In preparing for this less acute phase, European Union governments should ramp up Covid-19 immunisations of children, the bloc's executive body said, signallingit was considering plans to develop antivirals.

"It is estimated that between 60% to 80% of the EU population has by now had Covid," EU health commissioner Stella Kyriakides told a news conference.

With a recent drop in infections and deaths linked to Covid-19, the EU is now shifting away from mass testing and reporting of cases, Kyriakides said, confirming what Reuters reported on Tuesday. read more

But fresh Covid-19 surges are likely as the virus is expected to continue mutating, and therefore countries should have in place plans to shift back into emergency mode, and should ramp up vaccinations, the commission said.

In a document outlining the strategy for the post-emergency phase of the pandemic, Brussels urged governments to continue pushing for the immunisation of the unvaccinated, especially children before the start of the new school term in the autumn.

Immunisation rates are below 15% among children aged between 5 and 9, the youngest age group for which Covid-19 vaccines have been authorised in Europe. That compares to over 70% of teens aged 15 to 17, the document says.

The Commission also said it could back the development of new drugs against Covid-19, especially antivirals that are easier to store and administer.

The EU "will explore possibilities to support projects targeting the development of antivirals," it said.

Antiviral pills against Covid-19 developed by Pfizer (PFE.N) and Merck & Co (MRK.N) have been approved for use in the EU. But their uptake has so far been limited, due to a range of reasons including the slowing of the pandemic, high prices and complicated national procedures to prescribe them.

The EU executive also said it would work to support the development of the next generation of Covid-19 vaccines which it expects will offer more robust and longer-lasting protection against infection or transmission.