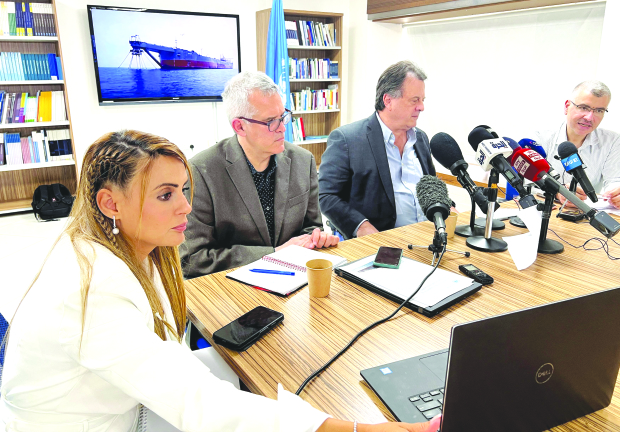 David Gressly, the United Nations Resident and Humanitarian Coordinator for Yemen, attends a news briefing at the UNDP Regional Hub Office for Arab States in Amman, Jordan May 9, 2022. Picture taken May 9, 2022. REUTERS/Jehad Shelbak

The United Nations will launch a $144 million appeal today for an operation to offload a million barrels of crude oil from a tanker stranded off the coast of war-torn Yemen for years which threatens a major environmental disaster.

David Gressly, the UN Resident and Humanitarian Coordinator for Yemen, said he hoped a donors conference held with the support of Netherlands in the Hague would quickly mobilise funds to avert a catastrophe on the Red Sea coast and its region.

He told Reuters the amount they were looking to raise was low “compared to the potential impact of a spill that would be catastrophic. It would cost $20 billion to clean it up.”

The Safer has been stranded off Yemen’s oil terminal of Ras Issa since 2015, and UN officials have warned it could leak four times as much oil as spilled during the 1989 Exxon Valdez disaster off Alaska.

Gressly said the operation should be done before September when turbulent winter seas would increase the risk of a breakup.

The environmental impact of a spill would be severe with desalination plants closed, cutting off a water source for millions of people, the UN said.

It could also disrupt vital shipping through the Bab al Mandab strait and create a humanitarian and ecological catastrophe centred on a country already decimated by more than seven years of war, the world body said.

No maintenance operations have been carried out on the Safer since 2015, when a Saudi-led coalition intervened in Yemen against the Iran-aligned Houthis after they ousted the internationally recognised government from the capital, Sanaa.

The coalition controls the high seas off Yemen.

In early March, the Houthis, who control the area where the tanker is moored and the national oil firm that owns it, signed an agreement with the United Nations to deal with it.

“The first step is to find a way to quickly move the oil into a temporary vessel until the long term storage issue is resolved. We’re not pursuing at this moment any attempt to sell the oil. It’s politically complicated to do that at this moment,” Gressly said.