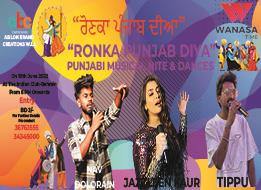 The exciting sights and sounds of traditional Punjabi music and dance will light up the Indian Club stage tomorrow.

‘Ronka Punjab Diya’ promises to be an evening of Punjabi entertainment that will showcase the Indian state’s wonderful culture and top-class entertainment talent to the wider Indian, expatriate and local population of Bahrain.

A number of stars will be flown in from India especially for the event including young singing sensation Jazzleen Kaur who regularly performs sold-out shows across India and another highly-talented young Punjabi singer, Nav Dolorain.

They duo will perform all their hit songs, which have more than a million views on YouTube for each one.

The evening’s star cast will also feature renowned, award-winning Indian playback singer Tippu, who has performed more than 4,000 songs in various Indian languages and whose vocals have been featured in many hit Bollywood movies.

Tickets to the event costs BD3 and gates open at 6pm.