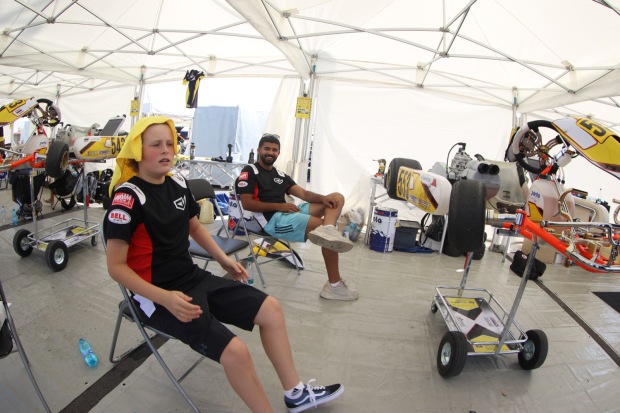 Luca, left, cools down between heats while coach Rashid Almammari looks on

Bahrain’s teenaged karting star, Luca Kane Houghton, suffered a blow yesterday to his campaign in the 2022 FIA Karting Academy Trophy’s second round in Cremona, Italy, when two mishaps in consecutive qualifying heats pushed him down the order to P15 heading into race day today.

The 13-year-old currently occupies fourth position, with 18 points, just 17 behind the leader, in the championship table after the first-round race in Genk, Belgium, last month.

But Luca’s effort to try and win the race in Cremona, that could catapult him into first position heading into the third and final round in Le Mans, France in September, has now been made more difficult, his coach said.

“Someone collided with Luca in the first heat and set us back, considerably,” Rashid Almammari told the GDN by phone from Cremona. “And even though Luca recovered admirably well to finish in P15 in that heat, we were always up against it.”

In the second heat, Luca was pushed off the track, causing a further setback to the team’s victory ambitions, he added.

“He finished in P15 in that heat as well. But winning the race from that point today is going to be a bit hard,” Almammari continued. “Right now, we just want to finish well in the race. We want to try and stay in the top five or ten.”

Luca told the GDN he had a small bruise on his left leg because of the accident but he was fine, otherwise.

“I think we just have to put yesterday behind us and focus on the race today,” he said. “You never know what might happen. There is still a chance to be competitive.”