Mustafa Husein stays a step ahead of a South Korean player

Less than a day and a half after nearly defeating Asian powerhouse, China, in what would have been one of the biggest upsets in sporting history, Bahrain ran a determined South Korean side ragged yesterday during their final group game of the FIBA Basketball Asia Cup 2022 in Jakarta, Indonesia, before losing 73-78 in another heartbreaking so-near-and-yet-so-far loss.

Having lost their previous two games and placed last on the four-team Group B table, Bahrain needed to win against table-toppers, South Korea, to have any chance of making it into the play-offs for the quarter-finals.

Having started the fourth quarter at Istora Senayan with a slim lead at 61-60, Bahrain played a tight, defensive game as Ali Jaber added one more point to make it 62-60. The South Koreans, so dominant in the first quarter, had seen their seven-point lead stripped away by half time and were now truly under pressure, as the Bahrainis just wouldn’t allow them any scoring opportunities.

Ra Gun-ah, the 6’8” South Korean power forward, finally broke the deadlock with a layup to make it 62-62 with three minutes having ticked by. When he scored again a minute later with a two-point jump shot, South Korea were two ahead at 64-62 and starting to gain some momentum.

After Ung Heo added three more to South Korea’s tally through a layup and a free throw, Bahrain’s Ali Husein made a layup of his own, with an assist from brother, Mustafa, to make it 64-67 with just five minutes left in the game.

A minute and a half later, after Gun-ah made another layup, Bahrain retaliated through captain Maitham Jameel, who landed a brilliant three-pointer with pitch-perfect precision to make the score, 67-69, with just three-and-a-half minutes left.

As the clock ticked closer to full time, the battle intensified with the score reading 73-70 in South Korea’s favour with a little over a minute left.

Soon, that became 76-70 after Ung Heo sank a three-pointer with only 50 seconds to go and Bahrain needed some magic to appear from somewhere if they were to get back in the game.

The excellent Ahmed Alderazi gave them a glimmer of hope when, with 20 seconds left, he scored a three-pointer to make it 73-76.

But, when South Korea’s Hoon Heo drew a foul and scored off the two resulting free throws, Bahrain’s fate appeared to have been sealed with the score reading 78-73 and just 15 seconds left.

When, with nine seconds to go, Mustafa Husein missed a three-point jump shot, it was all over as the South Koreans kept possession of the ball until the buzzer sounded.

But, despite Bahrain’s disappointing first-round exit from the tournament, basketball fans in the kingdom took heart from their national team’s brilliant showing against China and South Korea, who are ranked fourth and fifth, respectively, in Asia. Bahrain are ranked 21st.

Mindaugas Lukosius, 63, who has coached different teams around the world over the course of a four-decade career since starting in his native Lithuania in 1982, took charge last March and has overseen a dramatic change in the Bahrain team’s fortunes since.

Just two weeks ago, a new-look Bahrain side upset Syria and Kazakhstan in front of their respective home crowds in Aleppo and Nur-Sultan to march into the second round of the FIBA 2023 Basketball World Cup Asian Qualifiers. 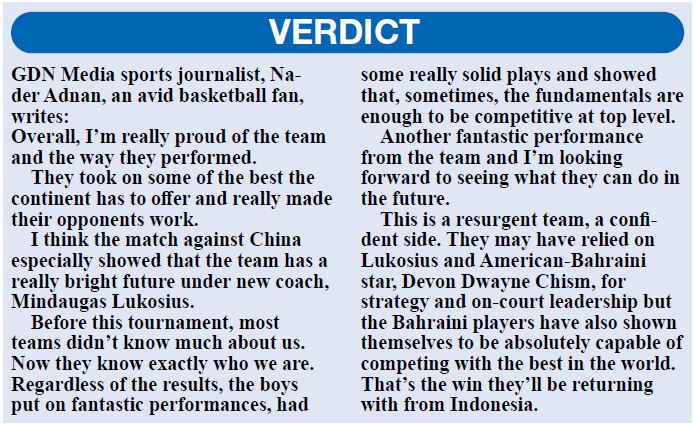