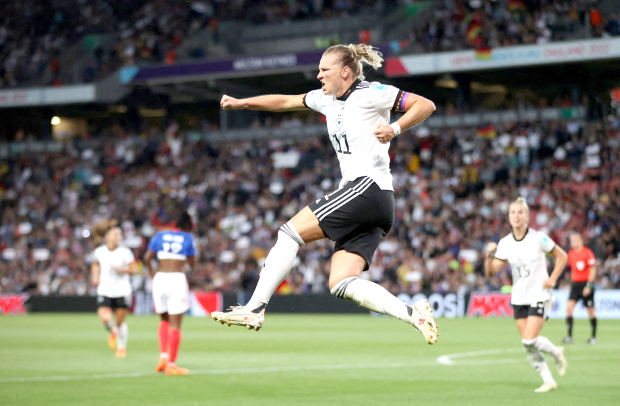 The Germans, eight times European champions, will take on an England team on a high after their 4-0 thrashing of Sweden in Tuesday’s other semi.

Popp fired Germany ahead in the 40th minute, sneaking in from the left to meet a fine cross from Svenja Huth and beat Pauline Peyraud-Magnin with a crisp finish.

The lead lasted less than four minutes, however, as France levelled when Kadidiatou Diani unleashed a fierce drive on the turn which rattled off the post and flew in off the back of Germany keeper Merle Frohms.

France had the better chances after the break, putting intense pressure on the German defence, but they could not find a way through.

Diani set up Selma Bacha, whose goalbound shot was blocked by Kathrin-Julia Hendrich and then Wendie Renard’s header at the back post was well saved by the alert Frohms.

The lively Diani then intercepted a poor back pass and burst forward but Frohms kept out her low drive from a tight angle.

Popp won the contest with her sixth goal in five games in the tournament, powering a superb header home from another excellent Huth cross in the 76th minute.

France continued to push, but with increasing desperation – Bacha went close with a curling first-time effort and Clara Mateo saw an effort fly just over the bar.

But in the end it was Popp who proved the difference and England will need to find a way to stop her if they are to win their first title against the country which has dominated European women’s football for so long.