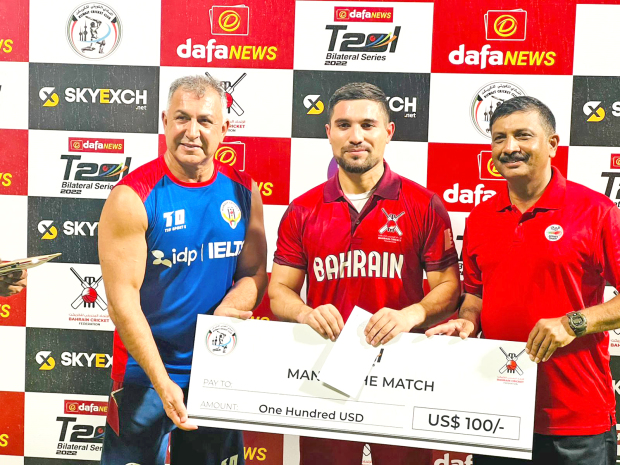 BAHRAIN beat Kuwait in a sensational Super Over last night after the opening T20I of a five-match series between the two teams ended with the scores tied at the Al Amerat Cricket Ground in Oman.

Player-of-the-match Haider Butt was the hero for Bahrain, as he plundered 19 runs off a Mohamed Shafeeq over, leaving Kuwait to chase down 20 off six balls. All-rounder Sathaiya Veerapathiran then held his nerve as his medium-pace restricted the Kuwaiti batsmen to just eight runs, causing his teammates to erupt in enthusiastic celebrations.

Butt’s Super Over assault was the second time in the night that he had brought Bahrain back from the brink after he partnered with the big-hitting David Mathias in a 71-run stand off just 38 balls that enabled Bahrain to recover from 95 for five in the 14th over to eventually tie Kuwait’s score of 166 for nine off their 20 overs.

Mathias provided the real impetus to Bahrain’s faltering innings, smacking five sixes in his 39 not out off just 24 deliveries. But it was Butt, no slouch himself in his 48 not out off 36 balls with two fours and two sixes, who held the innings together after coming in with the score at 64 for 3 in the seventh over.

The two added 58 runs off five overs before the final over of the innings arrived, with Bahrain on 153 for five, needing 14 to win. Butt and Mathias milked 11 off the first five deliveries bowled by Nawaf Ahmed before Butt tried to put him away for a boundary off the last ball of the innings, only to be restricted to two runs.

Earlier, after Bahrain captain, Sarfaraz Ali, won the toss and chose to field, Kuwait got off to a brisk start with openers Meet Bhavsar and Ravija Sandaruwan putting on 90 runs for the first wicket in just 10.2 overs. A mini-collapse, which saw them lose five wickets for 35 runs in six overs, reduced Kuwait to 125 for five with less than four overs to go in the innings.

But a late-order flourish by Edson Silva, who scored 15 off six balls with two sixes, and some lusty blows by the tail-enders, enabled Kuwait to finish with a reasonable enough total that, as it turned out, proved to be just about enough to defend.