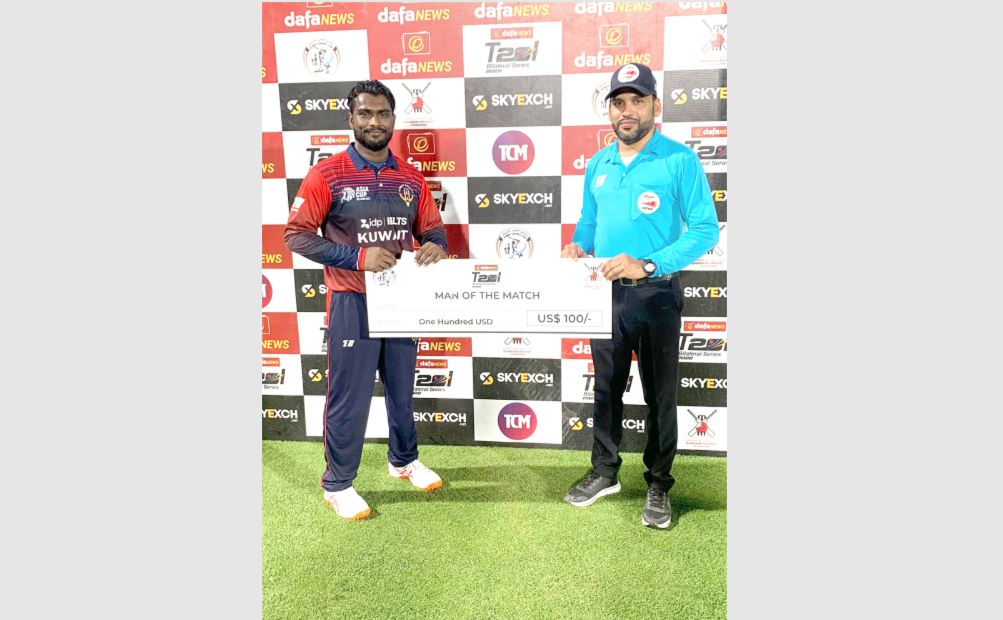 Player of the match receives his award

A stunning, unbeaten 44 off only 15 balls by all-rounder, Edson Silva propelled Kuwait to a dramatic, series-clinching, four-wicket victory over Bahrain last night in the fourth T20I at the Al Amerat Cricket Ground in Oman.

Kuwait, who had entered the game leading 2-1 in the five-match series, had slumped to 123 for six at the end of the 16th over with 41 still required off four overs to overhaul Bahrain’s total of 164 for six.

But Silva, who had come in at number seven with the score at 114 for five, smashed three fours and four sixes to enable his side to eventually win quite comfortably with nine balls to spare.

Silva’s assault, which saw Kuwait pillage 36 runs off the 17th and 18th overs of their innings, began when he hit off-spinner Sachin Kumar for four off just the second delivery he faced, before clearing the boundary off the very next ball for his first six.

After taking 15 runs off the Kumar over in partnership with Sayed Munib, Silva laid into left-arm medium-pacer Imran Anwar, blasting him for two sixes and two fours in an over that eventually went for 21 runs.

Suddenly, with the score at 159 for six after 18 overs, Kuwait needed only six runs off twelve balls and Silva capped a memorable night for himself and his team by launching medium-pacer Sathaiya Veerapathiran for his fourth and final six to seal victory.

Earlier, Kuwait captain Mohammed Aslam won his second toss in a row and sent Bahrain in to bat.

The move paid off as Bahrain, undone by a combination of line-and-length medium-pace and tight spin bowling, slumped to 77 for four in the 12th over with the cream of their batting back in the pavilion.

Stand-in captain Haider Butt was then joined by big-hitting all-rounder David Mathias, who has been in fine form throughout the series, and the two set about trying to repair the damage.

The two added 34 in just under five overs, but when Mathias fell for a brisk 30 off just 22 balls, Bahrain were 111 for five with only three overs and two balls left.

Butt, who had played a supporting role to Mathias and eventually finished with 22 not out, was then joined by Anwar, who smacked two fours and two sixes in a 10-ball 26 that enabled Bahrain to plunder 53 runs off the last 20 balls of the innings.

The two teams will meet again today for the fifth and final game, which starts at 6pm, Bahrain time.