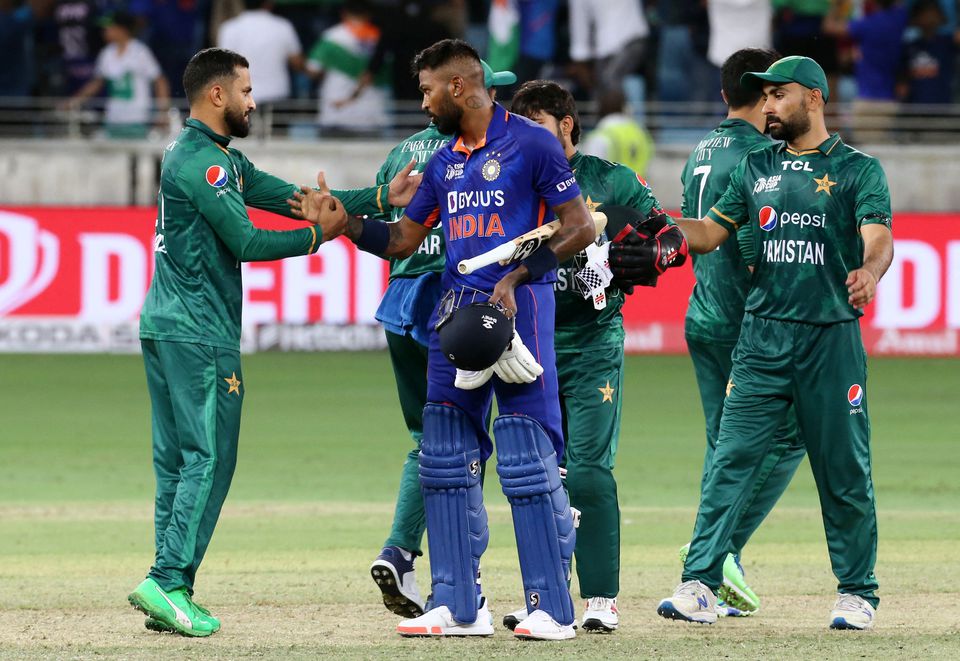 DUBAI: India all-rounder Hardik Pandya picked up three wickets and then smashed an unbeaten 33 to seal a five-wicket victory over arch-rivals Pakistan in a low-scoring thriller in the Asia Cup Twenty20 tournament in Dubai last night.

Bhuvneshwar Kumar picked up four wickets, including the prized scalp of Babar Azam, while Pandya expertly used short-pitched deliveries in India’s inspired fast-bowling display to help them skittle out Pakistan for 147.

All Pakistan wickets fell to India’s fast bowlers with Arshdeep Singh taking two and Avesh Khan picking up the remaining one.

In reply, the Pakistan bowlers fought hard and took the match to the final over when Pandya hit a massive six to seal the victory with two balls to spare.

Pakistan came into the contest having mauled India by 10 wickets in a Twenty20 World Cup match at the same venue in October in their last meeting.

It was India who landed the first blow when Bhuvneshwar dismissed Pakistan batting mainstay Babar for 10 in the third over with a sharp rising delivery after captain Rohit Sharma won the toss and opted to field.

Pandya dismissed the big-hitting Iftikhar Ahmed for 28 and also sent back well-set opener Mohammad Rizwan, who made 43, and Khushdil Shah in the same over – all through short-pitched deliveries.

After Pandya scythed through the middle order, Bhuvneshwar returned for his second spell to clean up the Pakistan tail by dismissing Asif Ali, Shadab Khan and Naseem Shah.

With fast bowler Shaheen Afridi, who made a big impact in their last win over India, missing due to injury, Pakistan’s attack missed the firepower necessary to defend a low total and struggled in hot and humid conditions.

Fast bowler Naseem, 19, gave Pakistan an ideal start by dismissing KL Rahul without scoring before Virat Kohli and Rohit steadied things for India with a stand of 49. Kohli, who is in the middle of a prolonged lean patch, struggled for timing during his laboured 35 off 34 balls.

Ravindra Jadeja, who made 35, and Pandya rescued India with a 52-run stand for the fifth wicket to turn the contest in favour of the defending champions before Nawaz dismissed the former on the first delivery of the final over.

Pandya’s 17-ball knock was studded with four fours, including three in the penultimate over against seamer Haris Rauf, and the six over long-on against Nawaz.