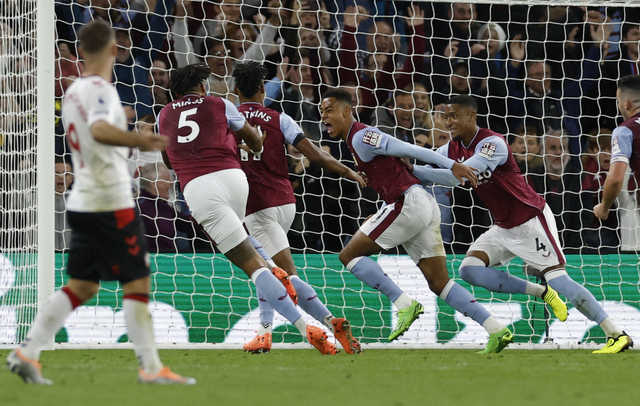 BIRMINGHAM: Jacob Ramsey netted his first goal of the season to give Aston Villa a scrappy 1-0 home victory over Southampton in the Premier League last night and snap a run of four games without a win.

With the cancellation of last week’s fixtures due to the death of Queen Elizabeth, the game was preceded by a minute’s silence, and fans applauded in the 70th minute and sang “God Save The Queen” in recognition of her 70-year reign.

Midfielder Ramsey put Villa ahead in the 41st minute, pouncing on the rebound and firing the ball off the underside of the crossbar after Ollie Watkins’ header from a corner was acrobatically kept out by Southampton keeper Gavin Bazunu.

Douglas Luiz almost grabbed a cheeky second for Villa in first-half stoppage time as he swung in a corner that looked like it was going to dip under the crossbar, but Bazunu tipped the ball over.

Southampton came out with a lot more urgency in the second half, but both sides struggled to get any decent shots on target as Villa defended their lead doggedly.

Villa’s second win of the season lifted them to 13th in the table with seven points from seven games. Southampton also have seven points and the same goal difference, but remained a place above Villa on goals scored.

Meanwhile, Nottingham Forest squandered a lead for the second successive Premier League game as they slipped to a 3-2 home defeat by Fulham.

Taiwo Awoniyi gave Forest the perfect start when he headed them in front after 11 minutes from a Ryan Yates corner.

But Fulham struck three times in six minutes early in the second half to turn the match on its head.

Tosin Adarabioyo headed the equaliser in the 54th minute from a Willian cross and three minutes later Joao Palhinha found the top corner with a superb left-footed effort.

Forest were at sixes and sevens and Fulham scored again when Harrison Reed fired home from a Bobby De Cordova-Reid cross.

Lewis O’Brien gave Forest hope with a 77th-minute effort but Steve Cooper’s side could not salvage a point.

Forest, who lost to Bournemouth in their previous game from 2-0 up, are second-bottom of the table with four points.

Fulham, who came up from the Championship with Forest last season, moved up to sixth with 11 points.