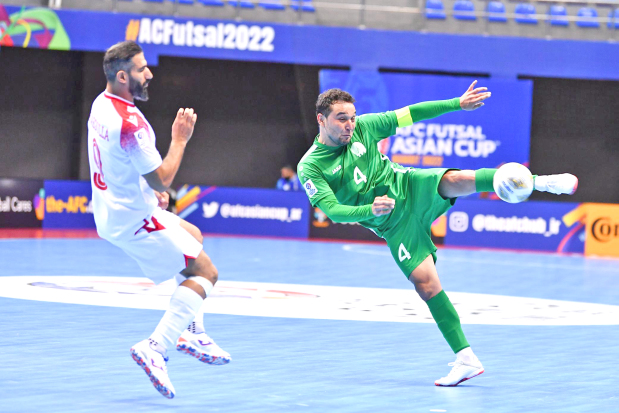 Abdulla, left, prepares to block a kick by a Turkmenistan player

Bahrain captain Mohammed Al Sanadi, playing with an injured leg, scored a sensational, last-gasp goal with just seconds left to help his team to a 4-4 draw with Turkmenistan in a pulsating Group B game of the 2022 AFC Futsal Asian Cup in Kuwait yesterday.

With Bahrain’s chances of qualification for the next round now hanging by a thread, a disappointed Bahrain team manager rued the many goal-scoring opportunities that he said his side failed to capitalise upon.

“We could have done better than this result,” Raed Baba told the GDN by phone from Kuwait. “I don’t know why we missed so many chances. We created plenty but just couldn’t manage to score off them.”

The national team needed to beat Turkmenistan to have any hope of staying in the race for the quarter-finals after having lost their opening match, 4-3, to Tajikistan last Tuesday.

But, despite taking the lead twice – courtesy of Ahmed Mohammed Antar and Mohammed Abdulla – in the first period, Bahrain saw their opponents equalise each time and then surge into a 4-2 lead in the second period with only four minutes left to play in the match.

Falla Abbas, then, scored Bahrain’s third goal off a penalty, but his team were still trailing 3-4 and time was running out.

Finally, with just 30 seconds left in the game, Al Sanadi, shrugging off the pain caused by a torn leg muscle, scored a fine goal to ensure that his team stayed alive in the tournament – but only just.

Bahrain will now play Uzbekistan, who lead the group with six points and are ranked amongst the top three teams in Asia, tomorrow in a game they must win in order to stay in the race for the next round.

But, even if they win, Bahrain’s fate will be decided by the result of the other Group B game tomorrow between Tajikistan and Turkmenistan. If Tajikistan, who are currently second on the table with three points from their two games, manage to beat Turkmenistan, who sit at the bottom, Bahrain’s tournament will be over.

But, if Turkmenistan defeat Tajikistan and Bahrain overcome Uzbekistan to leapfrog Tajikistan on points, Bahrain and Turkmenistan will end up in joint second place on the table with goal difference deciding which team will go through.

Baba, the Bahrain team manager, tried to be pragmatic about the possible scenarios that could result in his side sneaking through to the quarter-finals.

“Frankly, I think Uzbekistan will be difficult to beat because they are among the best sides in Asia,” he explained. “But, even if we did beat them, there’s also the possibility that Turkmenistan and Tajikistan play out a draw in which case we’d end up equal on points with Tajikistan and an entirely new scenario would come into play.

“I think it would be best for us to focus on our game against Uzbekistan. We will approach it with the intention of winning and, if we succeed and the result of the other match also goes in our favour, then great. But we can only try to achieve what is in our control and that is to give our best in this all-important game!”