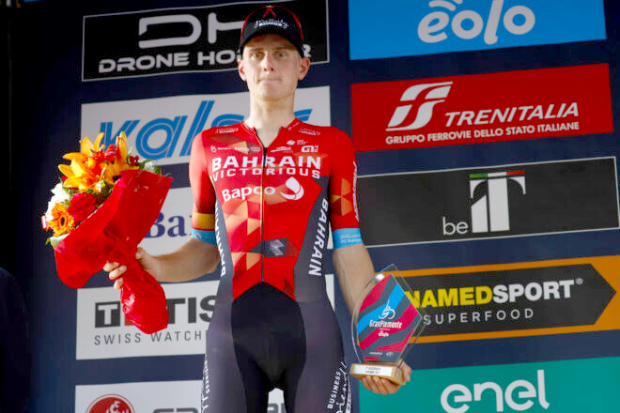 Bahrain Victorious rider Matej Mohoric took another podium result after the successful week at CRO Race, as he finished second in the sprint on the Classic Italian one day race Gran Piemonte yesterday.

The Slovenian rider was not among the day’s favourites seeing that the pure sprinters were expected to battle in the finish in Beinasco, nearby Turin, after 198km. But the course was designed to be open to different outcomes, featuring a hilly first part and a couple of ascents after 130km. In particular il Pilonetto, on the slopes of Colle di Superga, turned out to be decisive for the outcome of the race, as the sprinters were dropped, and the high pace of the front group didn’t favour their comeback.

Right after the race started in Omegna, four men attacked, but only two of them managed to stay away until 32km to go when they were caught by the front group formed on the day’s toughest climb, which included five Victorious riders. They worked very well together on the final flat part to keep the chasers away and to support Victorious’ leader of the day, Mohoric, who was one of the fastest riders in the reduced group of about 50 riders.