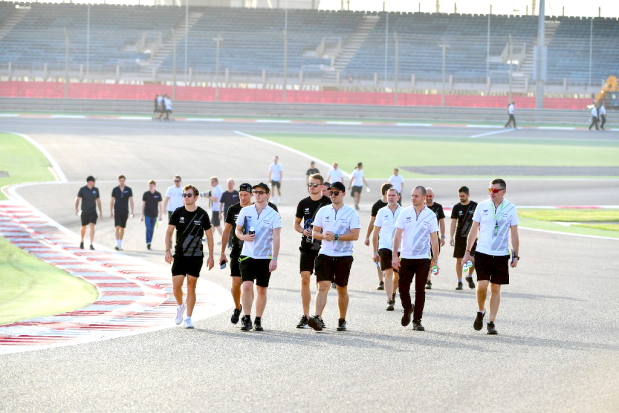 Bahrain International Circuit (BIC) is all geared up to bring the curtain down on the 2022 FIA World Endurance Championship (WEC) with the highly anticipated Bapco 8 Hours of Bahrain tomorrow and Saturday.

The WEC’s landmark 10th anniversary season is set for a thrilling climax as global endurance racing’s elite gather at ‘The Home of Motorsport in the Middle East’ for a grand finale.

The road to the Bahrain curtain-closer featured stops earlier this year in Sebring in the US, Spa in Belgium, Le Mans in France, Monza in Italy, and the foothills of Mount Fuji in Japan. Now, it’s on to the WEC’s only destination in the region for yet another spectacular duel in the desert.

Action this weekend flags off today behind closed doors, setting the stage for when BIC welcomes fans for two days of non-stop racing and entertainment.

The WEC’s star-studded cast of competitors will be holding their first Free Practice session over 90 minutes today between 12.15pm and 1.45pm, to be followed by a second Free Practice of the same duration from 5.30pm to 7pm.

For the WTCR, the first Practice over 45 minutes will begin at 10.50am and the next for 30 minutes will start at 3.30pm. The Porsche Sprint Challenge ME will have a pair of 45-minute Practices, flagging off at 9.35am and 2.15pm.

Tomorrow’s WEC action will include a third Free Practice and Qualifying, while both the WTCR and Porsche Sprint Challenge ME will each stage qualifying and their first races of the weekend.

Saturday will see the support series’ second races, and then the main event, this year’s Bapco 8 Hours of Bahrain, scheduled for a 2pm rolling start.

All are invited to attend the weekend’s events, which will include a colourful array of off-track entertainment for the whole family to enjoy. The attractions include stunt performances, a classic car show, a kids’ zone and live music.

All is still to play for at the Bapco 8 Hours of Bahrain with all 10 2022 titles of the FIA World Endurance Championship (WEC) set to be decided in the season-finale.

Two championship battles apiece are to be decided in the Hypercar, Le Mans Grand Touring Endurance (LMGTE) Pro and LMGTE Am categories, while four will be settled in the Le Mans Prototype 2 (LMP2) class.

Headlining the title races are the Hypercar World Endurance Drivers and Constructors’ Championships, going down to the wire between the Toyota Gazoo Racing and Alpine Elf Team crews.

The WTCR-FIA World Touring Car Cup will be the headlining support series at the Bapco 8 Hours of Bahrain weekend, and it is making its historic debut at BIC and the Middle East.

The championship is the pinnacle of customer touring car racing and sits at the top of the TCR category ladder, with WTCR Race of Bahrain the series’ penultimate event of the season.

Evolving from the FIA World Touring Car Championship ahead of 2018, WTCR is administered by the FIA and promoted by Discovery Sports Events.

A Balance of Performance formula, sustainable biofuel from P1 Racing Fuels and tyres from Goodyear provide a level playing field. Power is capped at 360bhp, while speeds reach 260kph.

While the FIA WEC field will be closing their season this weekend, the Porsche Sprint Challenge Middle East’s contenders will be opening theirs.

The one-make championship is the only factory-supported series in this part of the world. It was created to give the region’s home-grown driving talent an opportunity to realise their racing potential while enhancing personal track experience not only on race weekends, but also through extensive coaching and testing opportunities.

It has become popular for drivers and fans alike, featuring real racing and genuine rivalries on the track.

Round one will see a field of 19 international starters in the Porsche 992 GT3 Cup car, which is also driven in the Porsche Mobil 1 Supercup. Three different classes, Pro, Pro-Am and Am, will make it possible for all drivers to compete according to the current level of their racing career.

Lechner Racing are the organiser and promoter in co-operation with Porsche and other partners.

This weekend’s Bahrain round will be followed by five other race weekends at tracks across the Gulf, with two races each event. The championship is scheduled to conclude with two rounds supporting Formula 1, including the Bahrain and Saudi Arabian grands prix in 2023.