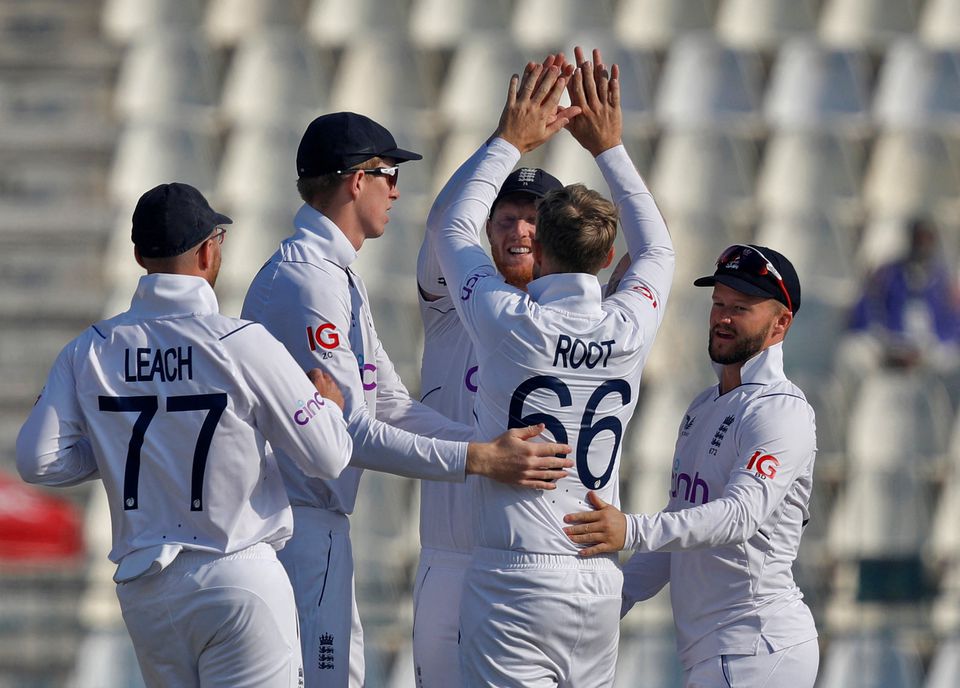 England pulled off a series-clinching 26-run victory against Pakistan in the dramatic second test in Multan on Monday in a fresh vindication of their highly entertaining brand of cricket.

A week after pulling off a memorable victory in the series opener in Rawalpindi, Ben Stokes and his men prevailed in yet another thriller to register, with a match to spare, England's first series win in Pakistan since 2000-01.

The hosts, set a daunting victory target of 355, added to the drama with their spirited rearguard before being all out for 328 in the second session on the penultimate day of the contest.

England had won only two away tests against Pakistan prior to the start of this series.

"It was another fantastic game to be a part of, going down to the wire yet again," England captain Ben Stokes said at the presentation ceremony.

Under Stokes, England have now won eight of the nine test matches playing a positive and result-oriented cricket that has endeared them to the fans.

Day four began with Pakistan needing 157 runs to level the series, and England requiring six wickets to clinch it.

Saud (94) held the fort while Nawaz counter-attacked to transfer the pressure back on England until Mark Wood (4-65) intervened.

The paceman strangled Nawaz down the leg side and then ended Saud's gallant knock via a debatable dismissal.

The soft caught-behind signal against Saud was upheld though replays suggested the ball in Ollie Pope's gloves may had grazed the turf.

With only 64 runs separating them from victory with three wickets in hand, Pakistan refused to throw in the towel.

Abrar Ahmed, who had claimed 11 wickets in his debut test, smashed four fours injecting fresh drama into the contest.

England could not be denied their victory though and Ollie Robinson sealed it when he had Mohammad Ali caught behind for a duck.

"To be honest, we were not up to the mark in the first innings," Pakistan captain Babar Azam said.

"After that, we fought back with the bowling and in the second innings we did good, but unfortunately we couldn't finish off."

Harry Brook was adjudged player of the match for scoring the only hundred of the low-scoring match.

England will conclude their first test tour of Pakistan since 2005 with the third and final match in Karachi from Saturday.