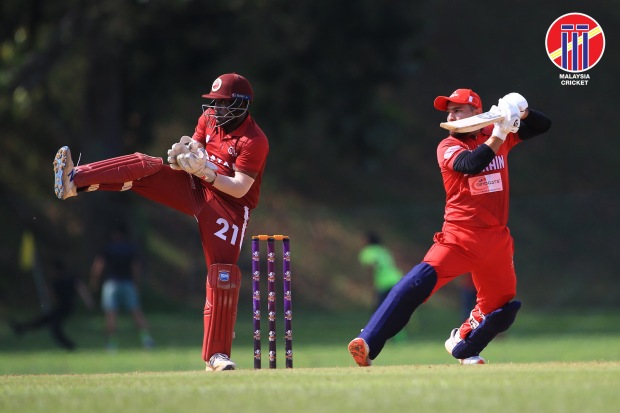 Qatar, chasing 165 to win, slumped to 36 for three in the sixth over before a breathtaking, unbeaten knock of 88 off just 46 deliveries by Muhammad Tanveer revived their fortunes.

The right-hander single-handedly kept his team in the hunt as he hit two fours and ten sixes in his blazing innings.

But, with wickets falling regularly at the other end, it was always going to be a tough ask for Qatar to get over the line, even with Tanveer playing as well as he was.

For a while, though, after Qatar had slumped to 58 for five in the 10th over, a 45-run stand off only 32 balls for the sixth wicket between Tanveer and Ikramullah Khan gave rise to some concern in the Bahrain ranks.

However, player-of-the-match Ali had other plans.

The Bahrain captain, bowling medium-pace, took four wickets in nine balls, forcing Qatar to collapse from 103 for five in the 15th over to 113 for nine at the end of the 17th.

With only last man Mohammed Nadeem for company, Tanveer threw his bat at everything but, even though he scored almost all of the 38 runs Qatar managed in the last three overs, his team still fell 13 runs short of the target.

Earlier, batting first after Qatar captain Mohammed Rizlan won the toss and put them in, Bahrain had lost both openers – Ali for a first-ball duck and Prashant Kurup for six – midway through the second over of the innings with the scoreboard reading 16 for two.

Imran Anwar, the hero of Friday’s Super Over win over Singapore, and the reliable Sohail Ahmed then set about repairing the damage.

The two put on 35 runs off 32 balls for the third wicket but, when Ahmed fell for 13 in the seventh over and Anwar followed three overs later for a stroke-filled 29 off 25 balls, Bahrain were 70 for four in the tenth over and in a bit of bother.

Ahmed Bin Nasir and Haider Butt then added 20 runs for the fifth wicket in just under two overs before Nasir fell leg-before to Tanveer, bringing Aziz to the crease with Bahrain 90 for five and less than eight overs remaining in the innings.

Aziz, who bludgeoned an unbeaten 29 not out off 14 balls in a losing cause in Bahrain’s first match against Malaysia last Thursday, took no time in getting going, square-cutting Khan for the first of his seven boundaries before driving left-arm spinner Nadeem through the covers for another.

Butt kept him company in a 41-run stand off just 27 balls but when he departed for an 18-ball 27, Bahrain were 131 for six in the 17th over and slumped to 135 for eight just five balls later as Danish Jasnaik and Rizwan Butt fell in quick succession.

Aziz, then, really laid into the bowling, lofting two sixes off the spinners and lashing the medium-pacers to all parts of the park as he smashed 28 runs off 12 deliveries before being caught behind off Khan for 52 in the final over of the innings.

The two teams will clash again today as the second round of the double round-robin league starts in the morning with Qatar, who are third in the table with two points, taking on last-placed Singapore in the other game.