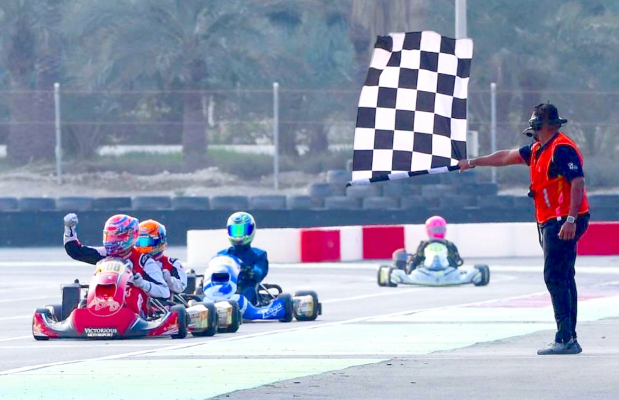 Bahrain’s up-and-coming karting star Lewis Smith rose to the top of the Senior MAX championship standings after clinching an impressive victory over the weekend in the 2022-23 Bahrain Rotax MAX Challenge (BRMC), held at Bahrain International Karting Circuit (BIKC) in Sakhir.

Lewis won both the Pre-Final and Final from the season’s fourth round on Friday, but then had an unlucky outing on Saturday in round five.

Nonetheless, the talented 17-year-old, who represents the Kingdom of Bahrain regularly in regional and international karting events, was able to jump to first place in his class’ title-battle and holds a two-point advantage heading into the last two meetings of this BRMC campaign.

“I had a mixed weekend, taking the victory in the Final of round four but then getting disqualified from the Final in round five due to a technical matter, but I’m pleased to now be leading the Senior MAX championship and I will be looking to finish the season strong and defend my position,” said Lewis, who is a leading member of Victorious Motorsport team.

In the BRMC’s fourth round, Lewis was classified third in Qualifying before powering to first place in the Pre-Final, which he won by a narrow 0.106 seconds from his closest challenger.

In the 15-lap Final, Lewis started from pole but lost the lead on lap six. Putting on a valiant comeback, he was able to recover his advantage just in time to take the chequered flag with a winning mark of 13 minutes 37.213 seconds.

Lewis showed his ability to shine in pressure situations, doing well to stave off the race’s runner-up by six-hundredths-of-a-second.

“It was a very tight finish but I was able to pull off the victory,” said Lewis. “It was good to get the full 35 points from the round (10 for the Pre-Final, 25 for the Final) and get my first win in the BRMC season.”

The following day in round five, Lewis started impressively with a top-three finish in Qualifying before taking fifth in the Pre-Final. In the Final, Lewis originally crossed the finish line classified third but was eventually disqualified due to a technicality that was no fault of his own.

“It was really disappointing to get the DQ but I have to take the good with the bad and learn from it moving forward,” Lewis said.

“I am still quite pleased with the pace I showed during the weekend and of course for getting a win. To be leading the championship at this crucial point of the season is also very important.

“I expect things only to get even tougher in the BRMC’s last two rounds. I’ll be ready to deliver the best performances I can to achieve my ultimate goal of the Senior MAX title.

“Thanks once again to all those who support me: my family, my team and my fellow-racers who always push me to give my all.”

The final two rounds of the BRMC season will be held in February and March.

Prior to those races, Lewis will be competing in another Rotax event, scheduled to take place on Friday and Saturday as part of the Dubai O-Plate Race Weekend at Dubai Kartdrome.

The meeting is one of the biggest annual events on the Dubai racing calendar, with drivers coming from all over the world to take part and battle it out for top prizes.

Testing is scheduled for today and tomorrow before the official Practices, Qualifying and Heats on Friday.