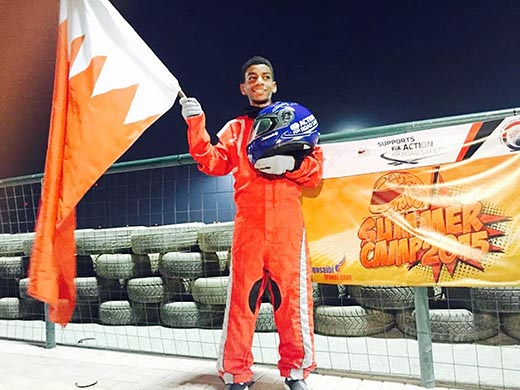 THE Bahrain International Circuit (BIC) hosted around 1,200 participants of the Royal Academy of Police (RAP) summer camp to educate them about safety procedures on the road and track.

The participants were divided into three groups. The first group took part on July 29, the second group on August 5 and the last group was for the girls on August 9.

These three groups were divided into another three groups. The first group took part in Off-road Land Rover experience. The second group was given a tour around the BIC and was introduced to the Formula 1 race circuit while the third group was given the chance to experience a karting trial after its participants were carefully selected.

The aim of this summer camp was to raise the level of national identity and commitment of the youth towards their country along with the pride of the Kingdom’s achievement in the world of motor sports.

It was also aimed towards planting the seeds of voluntary work into the minds of the youth especially in safety and security to help develop the Kingdom.

The participants were also guided through a first-aid and a Marshal’s course.

The lectures were both theoretical and practical and were held by a professional Bahraini who is certified to manage any race in any circuit of the world.

This safety programme is seen as one of the most important programmes which the Federation Internationale de l’Automobile (FIA) when it comes to safety and security.

Mrs. Michelle Yeoh, wife of the current FIA president Jean Todd, is an ambassador of this safety programme which concentrates on safety on roads.

This resulted in most motor sport associations around the world supporting the programme to achieve the most out of it.