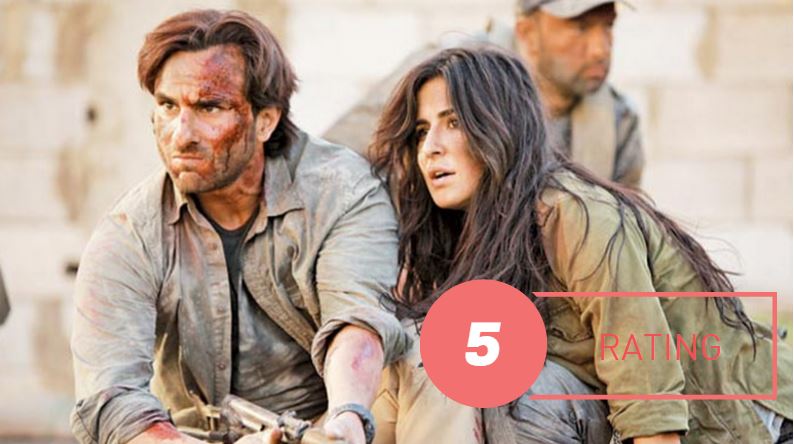 Director Kabir Khan blends fact and fantasy is search of hi-octane thrills in 'Phantom', a spy drama that is irretrievably undermined by a weak script and pedestrian acting.

The film harks back to the festering wounds inflicted on India by the 2008 terror attacks on Mumbai and constructs a wishful scenario: each of the perpetrators of that crime is punished by an intrepid agent unleashed by RAW.

Kabir Khan is on a strong wicket after the runaway success of 'Bajrangi Bhaijaan'. But Saif Ali Khan is in desperate need of a career-resurrecting hit. Like his eponymous character did in Agent Vinod, his fearless spy here is an inveterate globe-trotter who is never in one place for any length of time. The script based on S Hussain Zaidi book Mumbai Avengers is no different ? it flits about aimlessly as the hero goes pursues the mission of eliminating the big, bad terrorists in the neighbouring country and elsewhere.

One commendable aspect of 'Phantom' is its matter-of-fact approach that it adopts to its portrayal of the fight against terror. It keeps chauvinistic chest-thumping to the bare minimum. While it does not conceal the identities of the men who plotted the 26/11 attack, it does not blame Pakistan as a nation or any particular community for that dastardly act. In fact, Phantom projects the people of Pakistan as victims too, introducing a Lahore mother who has lost her son to the Lashkar-e-Taiba.

RAW plucks tainted soldier Daniyal (Saif Ali Khan) out of thin year and sends him on an impossible mission. The man has nothing to lose for he has lost all interest in life since being dismissed from the army for allegedly deserting his men in a bunker. He is introduced to Nawaz (Katrina Kaif), a former RAW agent who, too, has a personal reason to go after the terror masterminds.

Chicago, London, Beirut, Amman, Lahore ? the duo hops from one location to another looking for their quarries in dangerous places. Much of this is rather dreary and mechanical. It is not until Daniyal lands in Pakistan that 'Phantom' perks up a bit. The climax is passable, but Phantom takes two-and-a-half hours to get there, by which time the action has turned too predictable and humdrum to kindle genuine interest of what is unfolding on the screen.

Saif Ali Khan wears an inscrutable facial expression all through Phantom. It is difficult to tell whether the lack of animation is a reflection of the character's state of mind or the current state of the actor's career. Katrina Kaif is a misguided missile in this drama ? she does not know what she is supposed to be doing here. And neither does the audience.

Phantom has its moments, especially in the second half, but that isn't enough to sustain the film all through its running time.