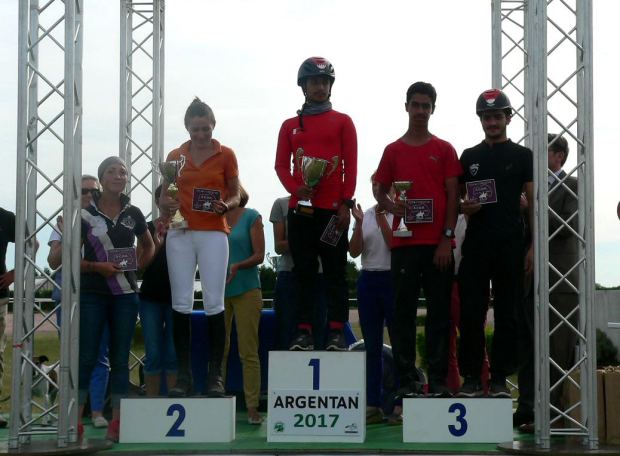 Janahi, centre, on the winner's podium

Bahrain Royal Endurance Team’s Hamad Janahi won first place in the 130-km Argenton Race held in France to qualify for the World Youth Championship which is set to be held in Italy.

The Representative of His Majesty the King for Charity Works and Youth Affairs, Chairman of the Supreme Council for Youth and Sports, President of Bahrain Olympic Committee, Captain of the Bahrain Royal Endurance Team, Shaikh Nasser bin Hamad Al Khalifa, praised the achievement of Janahi that allowed him join the world’s elite riders in the Italy event.

He also congratulated Al Miqdad and Abdul Samad for their respective achievements.

Shaikh Nasser said the Bahrain Royal Endurance Team’s administrative and technical body has developed a plan for the participation of the team in many European championships leading to more achievements in foreign races.

He pointed out that the high spirit and determination of all team members were the key to their successes, placing Bahrain at the forefront of international endurance sport.

“The team has achieved the goals for which it participated in the Argenton Race by way of garnering honourable sports achievement for the Kingdom in addition to preparing the team for upcoming endurance races,” Shaikh Nasser explained.

Shaikh Nasser pointed out that the Bahrain Royal Endurance Team has benefited greatly from this competitive championship of elite athletes, stressing that Janahi performed excellently and that these positive results would give him and the team strong motivation for next participations.