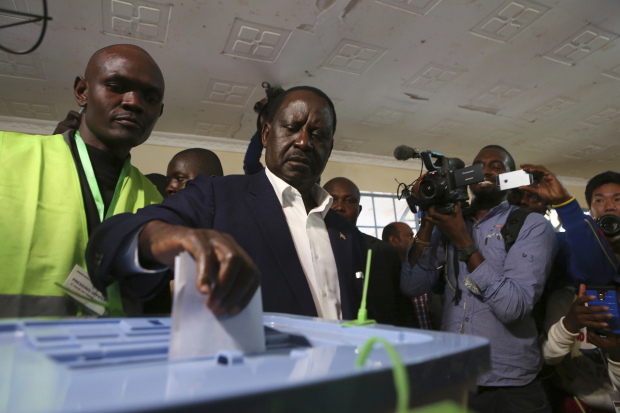 "A fresh presidential election will be held on the 17th of October 2017," said a statement signed by Wafula Chebukati, chairperson of the Independent Electoral and Boundaries Commission (IEBC).

"This is in conformity with the Supreme Court decision annulling the presidential election held on 8th August 2017."

Chebukati said only Kenyatta and opposition leader Raila Odinga, who brought the court challenge, would be on the ballot paper, along with their running mates.

At least one of the six other minor candidates who participated in August's election immediately threatened to go to court insisting he be included on next month's ballot.

On Friday, chief justice David Maraga cancelled the results of the August poll saying the election commission had failed to hold a legitimate election and that the results were therefore "invalid, null and void".

He added that the IEBC had committed "irregularities and illegalities" in the transmission of results from polling stations to the national tally centre.

However, a full explanation of the court's reasoning has yet to be published.

"It is imperative that a detailed judgement... is released in order to allow the Commission to identify areas that require improvement," Chebukati said.

He called "for patience and understanding among all stakeholders as we work together to deliver free, fair, credible and peaceful elections."

Kenyatta has committed to campaigning hard to win the new election while Odinga has called for IEBC personnel to be replaced -- and prosecuted -- in light of the court ruling.

Odinga's National Super Alliance (NASA) coalition alleges that fraud affected around a third of the 15.5 million votes cast last month, in which Kenyatta was declared victor by a margin of 1.4 million, and accuses IEBC officials of complicity in the rigging.

This was the third time in a row that Odinga had cried foul. The disputed result of the 2007 election triggered widespread violence that left over 1,100 people dead while in 2013 the Supreme Court threw out Odinga's challenge.

Friday's court ruling was greeted with surprise in Kenya and elsewhere because the judiciary has rarely shown such independence from the executive.

Afterwards Odinga hailed the "historic" ruling while Kenyatta described the judges as "crooks" but said he would abide by the decision.

The run-up to the August 8 election was marred by the murder of a top IEBC IT official and opposition allegations that rigging was certain.

Odinga alleged fraud shortly after counting began, claiming the system transmitting votes had been hacked, and that forms from polling stations that were meant to back up the electronic results were not being uploaded.

The August 11 declaration of Kenyatta's victory with 54 percent of the vote sparked two days of protests in the slums of Nairobi and Kisumu, traditional opposition strongholds.

At least 21 people, including a baby and a nine-year-old girl, were killed, mostly by police, according to an AFP tally.