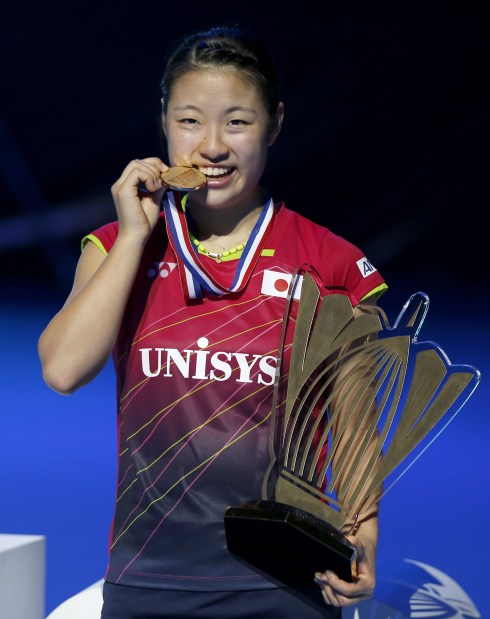 "I got lucky on a few points but I stuck to my strategy," said Momota, who moved his opponent around with overhead drops or net shots followed by clears or lifts to the back, and occasionally interspersed it with sudden explosive jump smashes.

Okuhara by contrast battled against the odds as she had all tournament. Her rallying and containment was often physically draining for her as well as opponents, but she always "found something emotionally when I needed it", she said.

One of the sport's legends, Peter Gade, the former world number one from Denmark, certainly thinks so. "It does look like a shift in the generations," he said. "It is certainly close to a generation move in the men's singles."

China, which started the day with hopes of three titles, eventually had to settle for one. It came in the women's doubles, in which the twin sisters, Luo Ying and Luo Yu, recovered from a worrying start to beat Denmark's Christinna Pedersen and Kamilla Rytter Juhl when Pedersen had to stop with a stomach ailment halfway through the third game.

Mohammad Ahsan and Hendra Setiawan, the world champions from Indonesia, won the men's doubles, while the married couple of Chris and Gabby Adcock produced England's most notable success of any kind for nine years by winning the mixed doubles.