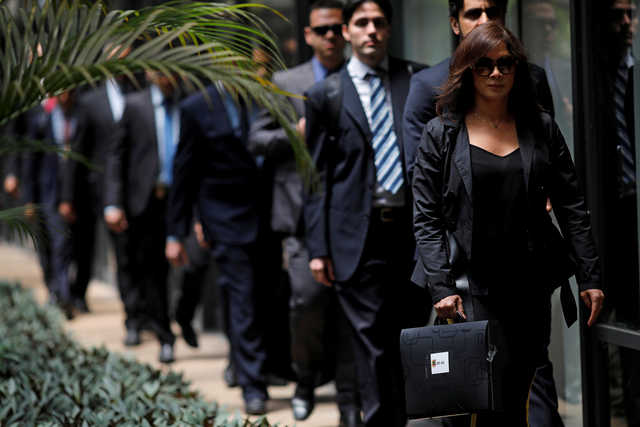 BRASILIA: The leader of the Brazilian government in the Senate offered to resign his leadership position on Thursday after being targeted in a police raid into possible corruption, a move that could weaken the sway of President Jair Bolsonaro in the upper house.

Speaking to journalists in capital Brasilia, Senator Fernando Bezerra Coelho offered to resign his leadership position, while staying in the Senate, after federal police officers raided his congressional offices on Thursday morning as part of a bribery investigation.

Shortly after, Onyx Lorenzoni, Bolsonaro's chief of staff, said he would talk to the president about the matter over the weekend.

Bezerra Coelho is a key figure in pushing through a proposed overhaul of Brazil's tax system, and he is in charge of ushering a sweeping pension reform bill through the Senate.

Police allege he received 5.5 million reais ($1.33 million) in bribes to favor certain contractors in a river dredging project as well as various other construction contracts.

"I took the initiative of offering to resign from the position of government leader so that the government can, in the coming days, evaluate whether it's the right moment to proceed with a new choice or not," Bezerra Coelho told reporters in Brasilia.

Bezerra Coelho and a legal representative denied that the senator committed any irregularities. They also criticized the police search, saying that while the action was supported by the federal police and authorized by the Supreme Court, the prosecutor general's office opposed the move.

Bezerra Filho was a key figure in resolving a multibillion-dollar dispute between the government and state oil firm Petroleo Brasileiro SA.

He did not immediately respond to a request for comment.

It was not immediately clear what impact the arrests would have on the ability of Brazil's government to move legislation through Congress. Bezerra Coelho told Reuters earlier in September that the body will likely pass the pension reform measure by mid-October. Tax reform, he said, would not be approved until the second half of 2020.

In any case, the episode weakens the anti-corruption bonafides of right-wing President Jair Bolsonaro who came to power in part on a promise to put corrupt politicians and businessmen in jail.