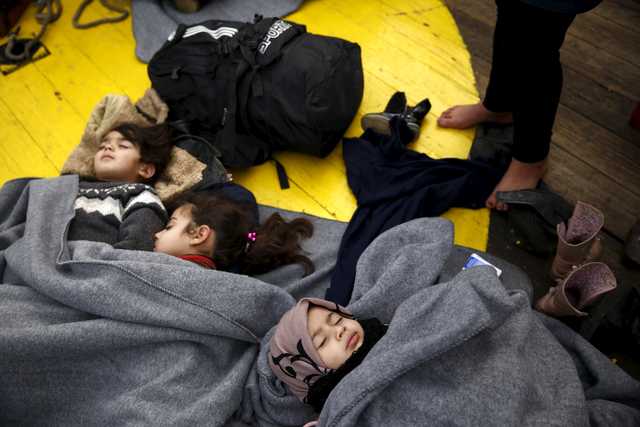 Children sleep on the deck of the rescue ship "Aegis 1" near the Greek island of Oinousses. (Reuters Photo)

Britain will take in an unspecified number of migrant children who have been separated from their parents by conflicts in Syria and other countries, the government said.

Officials will work with the United Nations' UNHCR refugee agency to identify youngsters eligible to take up residence in Britain, the Home Office interior ministry announced.

Prime Minister David Cameron announced in September that 20,000 refugees from camps on Syria's borders would be brought in by 2020. More than 1,000, half of them children, have so far arrived.

But Britain has opted out of European Union quotas for taking migrants and dispersing them around the 28-nation bloc.

"The crisis in Syria and events in the Middle East, north Africa and beyond has separated a large number of refugee children from their families," Immigration Minister James Brokenshire said in a statement.

He added that while the "vast majority" of them were better off staying in the region and remaining with extended family members, "we have asked the UNHCR to identify the exceptional cases where a child's best interests are served by resettlement to the UK and help us to bring them here."

A Home Office spokeswoman said she could not confirm how many children would be affected by the scheme.

"No country in Europe is doing more than Britain to help with the refugee crisis," Cameron told Sky News television.

"We're prepared to take more orphans from the region... not encouraging people to make the difficult and potentially lethal journey to Europe. I think our approach is compassionate, generous and right."

A spokesman for his Downing Street office said efforts would be directed towards protecting children from exploitation at the hands of traffickers.

Cases could include children with a direct family link to someone in Britain.

Britain has committed more than £1 billion to helping refugees in Syria and the region, meaning it is the second-largest donor to efforts to ease the crisis after the US.

It also announced Thursday the creation of a new fund of up to £10 million (13m euros, $14m) to support refugee children within Europe.

Immigration is one of the most sensitive issues in British politics.

Annual net migration hit a record high of more than 300,000 last year and Cameron has failed to deliver on a pledge to cut the figure to below 100,000.

The prime minister was criticised by opponents as crass for referring in parliament to "a bunch of migrants" at camps in Calais, northeastern France.