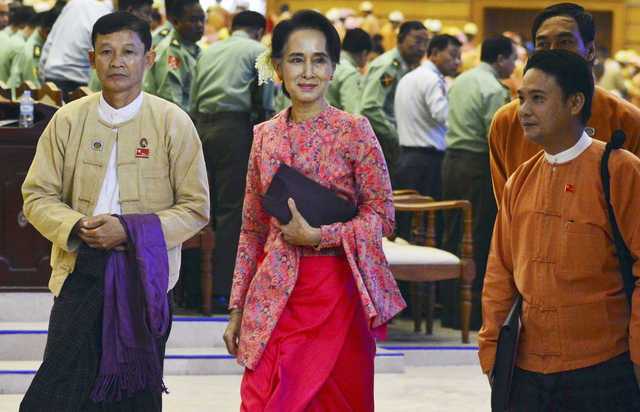 Suu Kyi, centre, walks along with other legislators of her party as they leave after a regular session of the lower house of parliament in Naypyitaw. (AP Photo)

Naypyidaw, Myanmar: Myanmar entered a new political era as Aung San Suu Kyi's pro-democracy MPs took their seats in parliament, bearing the hopes of a nation subjugated for decades by the military.

Wearing pastel orange uniforms, legislators from the National League for Democracy (NLD) arrived for their first day of work in the capital Naypyidaw, buoyed by a massive popular mandate from November's election.

That poll saw the NLD wrest a majority from the army establishment and has spurred hopes of a new political dawn in the long-repressed nation.

Suu Kyi, the centrepiece of Myanmar's struggle for democracy, entered the cavernous parliament building without comment.

She took a seat alone for the short opening session which saw the legislators sworn in and the appointment of a close ally, Win Myint, as lower house speaker.

"Today is a day to be proud of in Myanmar's political history and for the democratic transition," Win Myint said in an acceptance speech.

The new government faces a daunting rebuilding task in one of Southeast Asia's poorest countries, whose economy was crushed by almost half a century of junta rule.

Many NLD MPs are also political novices, unskilled in the business of government.

They must swiftly adapt to a difficult decision-making process in a legislature where unelected soldiers occupy 25 per cent of all seats.

The country will now choose a new president to succeed President Thein Sein, the former general who in 2011 launched dramatic political and economic reforms which culminated in the election.

Suu Kyi herself is barred from the post by a military-scripted constitution because she married and had children with a foreigner.

The 70-year-old has vowed to sidestep this hurdle by ruling "above" a proxy president, although she has yet to reveal her choice for the role.

While there is no clear schedule for the selection of candidates, it could be within days.

Elected members of both houses and the military will nominate three candidates to replace Thein Sein, who retains his post until the end of March.

The new president will then be chosen by a vote of the combined houses.