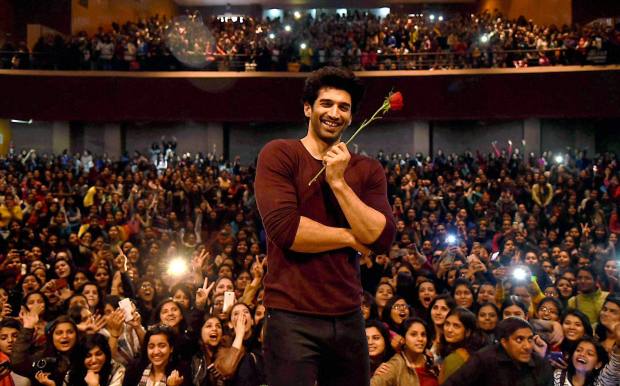 Actor Aditya Roy Kapoor during the promotion of his upcoming film ‘Fitoor’ at Gargi College in New Delhi on Wednesday. (PTI Photo)

Actor Aditya Roy Kapur made the right use of his singing skills as he hummed the title track of his upcoming romantic saga ‘Fitoor’ to woo his female fans in a college.

The 30-year-old star visited Gargi College, Delhi University, to promote ‘Fitoor’ and have a brief interaction with his fans.

The girls were in huge attendance at the auditorium where the interaction was planned and they unanimously requested the ‘Aashiqui 2’ actor to sing for them.

Strumming a guitar, Aditya sang a few of his hit songs, besides ‘Fitoor’. Some fans even managed to share the stage with the actor.

‘Fitoor’, also starring Katrina Kaif and Tabu, has been directed by Abhishek Kapoor.

The movie, an adaptation of Charles Dickens' ‘Great Expectations’, will arrive in theatres on February 12.