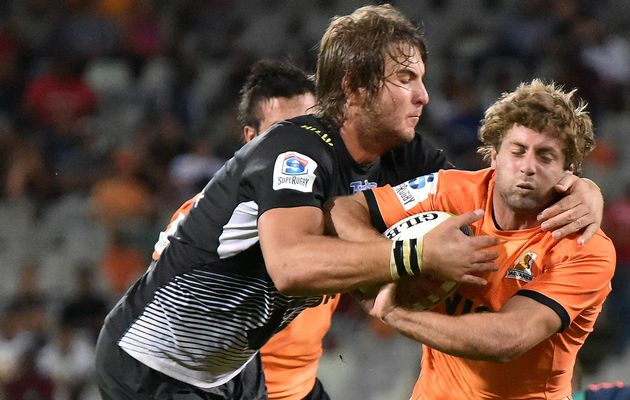 Agustin Creevy (capt) of the Jaguares is tackled by Lood de Jager (L) of the Cheetahs during their Super Rugby match in Bloemfontein. (AFP Photo)

Sydney: The ACT Brumbies and Stormers made statements, there were defeats for last year's finalists but biggest impact on the balance of power in Super Rugby from the opening weekend of the new season may be the arrival of Argentina's Jaguares.

The competition has expanded beyond the borders of South Africa, Australia and New Zealand for its 21st season with new outfits in Asia and South America as well as the return of South Africa's Kings to take the complement of teams to 18.

Japan's Sunwolves put in a stronger than expected performance in Tokyo but were well beaten 26-13 by the Lions in their first match, while the Kings shipped six tries to go down 43-8 to the Stormers.

Boasting a squad packed with players who helped the Pumas to the World Cup semi-finals last year, Argentina's Jaguares were always going to be the strongest of the new arrivals and they duly confounded the lowly expectations afforded expansion teams.

After taking a while to adjust in Bloemfontein on Friday night, they rallied from a 24-3 first half deficit to beat South Africa's Cheetahs 34-33 and claim an historic victory.

"We had an idea of what Super Rugby would be like and today it was confirmed," said coach Raul Perez.

"Winning helps a lot, but we have to understand the dimensions of the tournament and the speed at which it is played.

"First, though, we need to rest up because it was an intense game and it is very important that we recover quickly."

Backing up week-by-week after intense battles, they move on to face the Sharks in Durban next weekend, and an imposing travel schedule means the Jaguares might not quite be up to a title challenge this season.

With pace and power all over the park, however, no team will fancy playing the Argentines, however, and skipper Agustin Creevy is convinced they will get better.

"We didn't play as well as we had hoped," he admitted.

"The team responded to adversity as well as we'd hoped and that we were nervous was natural. We rallied from a twenty-point deficit... because we were convinced that we could win this match despite the challenges we faced."

By contrast with the well-established team structures at the Jaguares, the Sunwolves have been thrown together in a few weeks and their coach Mark Hammett was keen to point out that they are not an extension of the national team.

"We're not the Japanese team, we are the Sunwolves," said the New Zealander, whose charges now have a week off before hosting the Cheetahs in Singapore.

"We've been together two and a half weeks, so our system and way of defending should improve in time.

"On attack we showed that we can keep up with the pace of the game. That was not a problem. The speed we're comfortable with, it's the physicality we need to be better at."