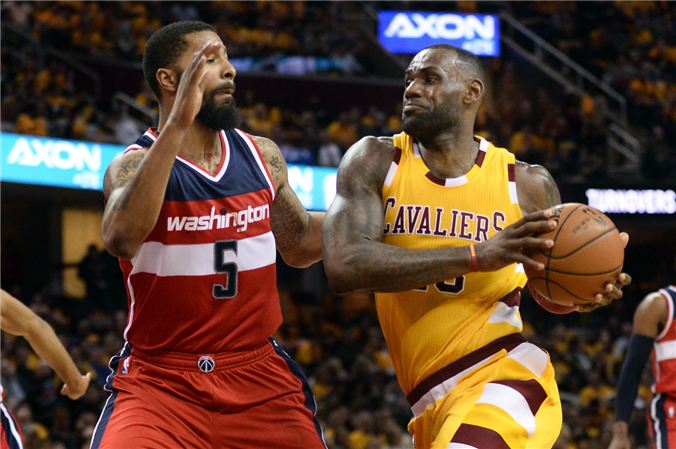 Cleveland: LeBron James flirted with a triple-double before sitting out the fourth quarter, Kyrie Irving scored 21 points and the Cleveland Cavaliers avenged a recent ugly loss to Washington by throttling the Wizards 108-83 on Friday night.

The Cavs were blown out at Washington on Sunday, when James watched from the bench and the Wizards built a 30-point lead.

But with James energized after not playing since Monday, and Cleveland using a "small" lineup as forward Kevin Love got the night off, the Cavs snapped Washington's four-game winning streak.

John Wall scored 17 and Markieff Morris 13 for the Wizards.

Denver: Brook Lopez had 20 points and tipped in a basket with .4 seconds left in overtime to lift Brooklyn over Denver.

Nikola Jokic missed badly on a backward desperation shot off an inbound pass as time expired, and the Nets beat the Nuggets for the fifth straight time.

Markel Brown had 21 points to lead the Nets and Bojan Bogdanovic added 17 points. Bogdanovic made 2 of 3 free throws in the final seconds of regulation to force overtime.

Randolph, who finished with eight rebounds, was 9 of 18 from the field as Memphis won its third straight and seventh in the last nine. Lance Stephenson, acquired by the Grizzlies at the trade deadline, had 16 points on 8-for-11 shooting, while Mike Conley had 12 points. Mario Chalmers finished with 11 points.

Gordon Hayward led the Jazz with 18 points, including keying Utah's offense in the third quarter. Derrick Favors scored 14 points, shooting 7 of 17. Rudy Gobert had 13 points, 18 rebounds and five blocks. Shelvin Mack had 12 points and eight assists for Utah, which lost its fifth straight, striking another blow to its playoffs hopes.

Charlottes, N.C.: Kemba Walker scored 33 points and had 10 assists, Nicolas Batum added 31 points and Charlotte got its ninth win in the last 11 games.

Walker shot 9 of 17 from the field and made all 11 free throws for his 10th 30-point game of the season as the Hornets swept the three-game series with the Pacers for the first time in franchise history. Walker has averaged 29.6 points during Charlotte's current three-game win streak.

Al Jefferson chipped in with 13 points for Charlotte, which shot 48.1 percent for the game to improve to 21-9 at home.

Paul George scored 35 points and Ian Mahinmi had 10 points and 14 rebounds to lead the Pacers.

Antetokounmpo just missed his third triple-double in six games. Playing at a high level since the All-Star break, he had the first two of his career on Feb. 22 against the Los Angeles Lakers and Feb. 29 against the Houston Rockets. Antetokounmpo, whose 12 assists were a career high, made 9 of 17 shots and 9 of 10 free throws while playing point forward most of the game.

Karl-Anthony Towns scored 21 points for Minnesota, but only six after the first quarter.

Lillard scored 50 points, one shy of his career high set last month in a 137-105 win over Golden State.

DeRozan went 24 for 25 from the free-throw line, both career highs. Jonas Valanciunas had 17 points and 10 rebounds for Toronto.

Portland lost the season series to Toronto for the first time since 1996-97. C.J. McCollum added 24 for Portland, but he and Lillard were the only Blazers in double figures.

Boston trailed by eight points in the fourth quarter but used a series of mini-runs to eventually take the lead for good on the driving layup by Bradley.

Carmelo Anthony had a chance to win the game in the closing seconds but badly missed a 3-pointer off the backboard as time expired.

Anthony had 30 points and seven rebounds. Arron Afflalo added 17 points and Kristaps Porzingis finished with 15 points for the Knicks, who lost their third straight.

The Heat improved to 7-2 since losing Chris Bosh to a blood clot in his calf. They are 4-0 since signing Johnson after the seven-time All-Star agreed to a buyout with Brooklyn.

Devin Booker and Ronnie Price added 14 points each for the Suns, who got their first road victory since Dec. 7 at Chicago. The streak tied a franchise record.

Elfrid Payton had 19 pints and 11 assists for Orlando, which shot 35 percent against the NBA's bottom-ranked team in defensive field-goal percentage.

Kyle Korver made all four of his 3-pointers for 15 points and newcomer Kris Humphries added 14 points and eight rebounds off the bench. The Hawks have held four straight opponents under 40-percent shooting for the first time since Dec. 7-20, 1996.

Julius Randle had 16 points and 10 rebounds for the Lakers, who have lost two in a row and 10 of 11. D'Angelo Russell's streak of four straight games with 20 or more points ended when he finished with seven points on 3-of-16 shooting.

Los Angeles fans began chanting Kobe Bryant's name in the closing minutes, but he was nursing a sore right shoulder and wasn't around.